An atlas of India's groundwater aquifers

Maps in the atlas, released by Central Ground Water Board, indicate priority areas for water conservation and groundwater recharge

The Central Ground Water Board (CGWB) has released an Atlas on Aquifer Systems of India with detailed data on 14 principal and 42 major aquifers. This pulls together archival information from the Board on aquifers in these states and presents it in graphical format through tables and maps. It is available at http://cgwb.gov.in/AQM/. The atlas also provides detailed data on six states: Chhattisgarh, Himachal Pradesh, Karnataka, Kerala, Meghalaya and Tamil Nadu.

Consequences of ravaging the Aravalli

It also highlights what has been known for a long time—groundwater levels across India are falling and the quality of ground water is also declining. The decline is particularly sharp around Delhi, Western Uttar Pradesh, Haryana and Rajasthan. “Construction around the Aravalli hills has severely disturbed the ground water recharge in the entire region,” said CGWB chairperson S C Dhiman. 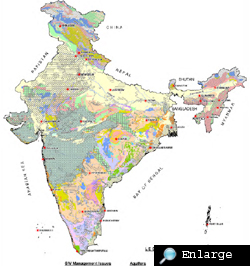 Certain areas of peninsular India are also severely affected by over-extraction of groundwater, the atlas shows. Dhiman, who retired the day the atlas was released on September 28, said the recharge process was faster in this rocky part of the country, and a few years of good rainfall could restore the health of the aquifers. Maps in the atlas indicate priority areas for water conservation and ground water recharge, and areas where water quality is affected by arsenic, fluoride and nitrates.

Maps in the atlas show various thematic layers such as climate, topographic settings on the occurrence of aquifers, movement, and chemical quality of ground water. The compilation has been done on a scale of 1:250,000 by integrating the geological and hydro-geological data of CGWB, the Geological Survey of India, and other agencies. Tables provide information on the characteristics of aquifers as they occur in different parts of the country. The atlas took two years to prepare and the purpose was to provide a broad overview of the groundwater situation in the country, said S K Sinha, scientist-D with CGWB.

Groundwater expert and head of the Advanced Centre for Water Resources Development and Management (ACWADAM), Himanshu Kulkarni, said the atlas will help to identify vulnerable areas and can be the basis for further research. However, “it is not a replacement for the aquifer mapping exercise to be conducted during the 12th Five Year Plan.” In this atlas, CGWB has brought its numerical and digital data into a map framework.

CGWB is contemplating NAMP on a scale of 1:50,000 or more during the next two Five Year Plans (12th and 13th). This will involve compilation and synthesis of all relevant data collected by CGWB and various other agencies. It will identify existing data gaps, create additional data and bring out comprehensive aquifer maps along, their groundwater potential and realistic and scientific management plans to ensure long-term sustainability.

There are already several groundwater information systems in India run by different government agencies. They all use base data from CGWB. CGWB’s own system is called the Groundwater Estimation and Management System. Funded by the World Bank, it has been implemented in nine states. It provides to compile, visualise, and analyse hydro-geological and allied attributes of groundwater resources. This system has been built using MapInfo Professional (GIS), MapInfo Vertical Mapper (spatial interpolation and contouring), SPSS (statistical analysis) and R2V (raster vector data conversion).

Another, also run by the Ministry of Water Resources, is the Generation of Database and Implementation of Web Enabled Water Resources Information System (India-WRIS). This again uses CGWB data and is a joint venture of the Central Water Commission, the ministry and Indian Space Research Organization (ISRO). It aims at providing a single window solution for comprehensive, authoritative and consistent data and information of India’s water resources along with allied natural resources in a standardised national GIS framework (WGS-84 datum and LCC projection) tools.