And the frog survived 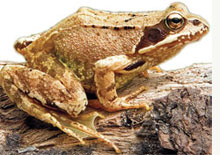 THE outbreak of disease in a population can cause a large number of deaths, if unchecked. This decreases the genetic diversity of the species as a whole. The species lacking diversity is unable to adapt to the ever-changing climate and environmental conditions. This opens the door for further disease outbreaks. Gradually the species becomes extinct.

Frog populations are declining worldwide. But some frogs have found a way to save themselves from becoming extinct. A team said outbreak of diseases in these frog populations is changing the way they behave.

The team from the UK studied the common frog species (Rana temporaria). Large-scale deaths caused by the ranavirus are common in this species. Yet the species has survived an 83 per cent decline over the years. Even its genetic diversity has been maintained.

The team has a hypothesis to explain this: the mating behaviour of the frogs changed or frogs migrated to join different populations to counter the virus. The diseased frogs are unable to mate with healthy frogs; even the healthy ones prefer to mate with those that are healthy. Thus mating amongst individuals from different populations prevented important genes of the species from getting lost. The study was reported in the August issue of Molecular Ecology