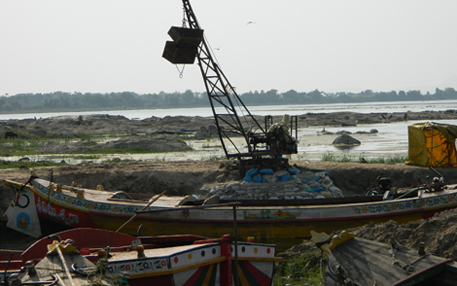 The Andhra Pradesh High Court on April 12 refused to lift the stay it had imposed on sand mining and auction of sand reaches in the state.  The court, however, exempted state-owned Singareni Collieries Company Limited (SCCL) from the stay order.The court rejected repeated requests made by advocate general A Sudarshan Reddy, who sought modification in the stay order. “The order of the apex court clearly states that the state governments now have to obtain nod from the Ministry of Environment and Forests before according leases for minor minerals. When this order is in force, how we can permit sand mining?” the court asked the advocate general.

The advocate general tried to convince the court saying the case before the apex court was about certain states which do not have any norms regarding the area to be mined. “Andhra Pradesh’s case is different as we have an Act in place in the form of the Andhra Pradesh Water, Land and Trees Act (APWALTA) of 2002, to regulate the area and we also have a mechanism to curtail malpractices.”

In response the court said, “If that is the case, then get a clarification from the apex court.”

The advocate general then requested the court to at least allow the renewal of the 46 leases in the state which are in their second year. The court said that the apex court order clearly mentions that even the renewal of leases requires a Union environment ministry nod.

The court had earlier, on March 21, stayed sand mining and auction of sand reaches in the state in an interim order on a public interest litigation (PIL) filed by Annam Sivaiah and K Koteswara Rao, two farmers from Dharanikota village in Amaravahti mandal in Guntur district. The petitioners had pointed out that there was a strong contactors-politicians-bureaucrats nexus, and the concerned officials did not take necessary actions while the sand mine lease holder in their area violated rules and regulations.  The petitioners had also argued that contractors were mining sand beyond the area and level notified by the state groundwater department.

In the wake of the blanket stay on sand mining, SCCL approached the court pleading for exemption. The company submitted that by virtue of the court’s interim orders, the supply of sand to the collieries came to a total stop and the company was unable to get the sand leases operative.

“Sand is treated as a major mineral for the purpose of stowing. After coal is extracted in underground mines, voids will form and need to be filled up with sand to continue mining operations,” argued the company. The company pleaded that if it was not excluded from the order, operation at its six coal mines in Karimnagar district would have to be stopped.

The court exempted the company clarifying that the blanket ban would not apply to SCCL as it’s owned by the state government.

In Andhra Pradesh, reckless sand mining is rampant in many stretches of the major rivers like Krishna, Godavari, Penna and Vamshadhara. The most affected districts are Krishna, Guntur, East Godavari, West Godavari, Warangal, Khammam, Karimnagar and Adilabad.

In 2002, the Andhra Pradesh government enacted the Water, Land and Tree Act which aimed to protect surface and groundwater resources, promote water conservation, regulate ground and surface water use, protect land and the environment and prohibit sand mining in areas where groundwater is overexploited. It does not allow mining within 500 metre of any groundwater extraction structure, or structures like bridges, dams and weirs.

But the rules are openly flouted despite the presence of a district-level sand committee formed to monitor the mining process.