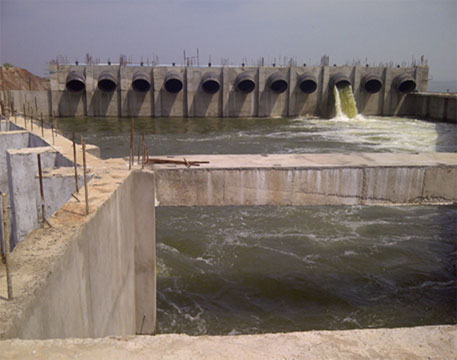 Disappointed over the final verdict of the Krishna Water Disputes Tribunal (KWDT II), Andhra Pradesh has decided to challenge it in the Supreme Court. The decision to move court was taken at a state Cabinet meeting on December 4. An all-party meet will be called soon to decide the future course of action regarding the tribunal award. The state took the decision in the backdrop of strong protests by political parties and farmers’ organisations against the award.

The tribunal led by former Supreme Court judge, Brijesh Kumar, pronounced its final verdict on November 29. This is the second tribunal that looked into the dispute over sharing of the Krishna river waters among the three riparian states—Maharashtra, Karnataka and Andhra Pradesh. The first tribunal (KWDT- I), led by retired Supreme Court judge R S Bachawat, had given its order in 1973, and it was binding till May 2000. The Centre appointed the second tribunal in 2004 and it started its work in 2006.

As per the final award, Andhra Pradesh is entiltled to get  1,005 thousand million cubic feet (tmc) of water, Karnataka will get  907 tmc and Maharashtra’s share is  666 tmc (1 tmc equals 28.3 billion litres). This award will be binding till 2050. The tribunal has asked the Centre to appoint a Krishna Water Decision Implementation Board,  giving representation to Karnataka, Maharashtra and Andhra Pradesh as well as the Centre.

“The tribunal’s order is against the state’s interests,” says K Sudarshan Reddy, the state irrigation minister. The tribunal has done  gross injustice to Andhra Pradesh, which is located at the tail end of the river, while pleasing the upper riparian states, he alleges.

After releasing the draft (interim report) on December 30, 2010, the tribunal had asked the three states and the Centre to file their objections and points on which they need explanation and clarifications. Andhra Pradesh sent its petition to the tribunal on March 28, 2011, raising 14 objections. “But the tribunal rejected all the objections we raised,” says Reddy.

Why the state is unhappy?

Under the Bachawat tribunal award, Andhra Pradesh’s share of allocation was 811 tmc. The share of Karnataka was 734 tmc and that of Maharashtra was 585 tmc (see table). The Bachawat tribunal determined the availability of water in the Krishna for distribution among the three states by taking data for 78 years from 1894-95 to 1971-72. The tribunal’s assessment was that there would be 2,060 tmc water at 75 per cent dependability (which means in a scale of hundred years, more than 2,060 tmc of water would be there in 75 years and the remaining 25 years would be deficit years in which water availability would be less) and 70 tmc of  return flow (the amount of water flowing back to the river after utilisation).

Andhra Pradesh, which is located at the tail end of the river, has a self-catchment of 337 tmc and the rest is released from the upper riparian states. To compensate for the deficit years in which the flow will be less than 2,130 tmc, the Bachawat tribunal granted Andhra Pradesh the liberty to use the surplus water. The state has taken up seven irrigation projects that utilise 227.5 tmc water and cater to mainly the drought-prone districts of Telanagana and Rayalaseema regions (see 'Under threat?'). The total cost of these seven projects is around Rs 32,000 crore and the state has already spent about Rs 25,000 crore.

However, under the final award of the Brijesh Kumar tribunal, the state has emerged as a loser. It is going to lose its freedom to use the surplus water. The surplus water is going to be divided among the three states. Besides, the tribunal deviated from the 75 per cent dependability and assessed the avialbilty of water at 65 per cent dependability, taking  a yearly water  yield series of 47 years (1961-62  to 2007-2008).  The tribunal’s assessment was that at 65 per cent dependability, 2,293 tmc of water is available for distribution. That means 163 tmc more than the amount calculated by the Bachawat tribunal. This quantity was divided among the three states.

“By this award, the Brijesh Kumar tribunal has defeated the justice given by the Bachawat tribunal to the tail end state of Andhra Pradesh,” says Cherukuri Veeraiah, a Hyderabad-based retired engineer who is an expert in the Krishna water sharing issues. When the Central government amended the Inter-State Water Dispute Act (1969)  in 2002, it was clearly stated that assessments by the previous tribunals would not be altered.

The state is equally bitter about the tribunal’s allowing Karnataka to raise the height of Almatti dam across the Krishna river from 519.6 m to 524.26 m. Raising the height of the dam has been a bone of contention between the two states. Andhra argues that in case the height is raised, Karnataka will have a higher storage facility. At present, the storage capacity of the dam is 129 tmc. If the height is raised, the storage capacity will increase by another 130 tmc. If that happens, the state fears, release of water to Andhra will be delayed because Karnataka will first fill the dam and then release water to Andhra Pradesh.

“There could be at least one or two months delay in releasing water,” says P Padma, president of state unit of All India Kisan Sabha (CPI).The delay means late transplantation of paddy, which in turn will make kharif crop (monsoon crop) vulnerable to cyclones in October –November,  she points out. Besides, harvest will be delayed and there will be no scope for raising a second crop in the Krishna delta. “We are urging the state to exert pressure on the Centre to scrap the award,” she says.

The state has also apprehensions about Maharashtra and Karnataka taking up new projects since their allocations have gone up. In its petition to the tribunal in 2011, Andhra Pradesh had alleged that both the upper riparian states have already taken up many new projects and were utilising more water than the original allocations by the Bachawat tribunal.

But the Brijesh Kumar tribunal has dismissed all these fears, saying they are baseless. Besides, the tribunal points out there will be an implementation board which will see to it that all the three states abide by the final ruling and utilise only that much quantity of water which is allocated to each state.

The allocation by Brijesh Kumar tribunal will not be notified until the case is disposed of.

Meanwhile, since elections to Parliament as well as the state Assembly are round the corner, poitical parties are trying to fish in troubled waters, making the tribunal’s award an issue. Farmers’ associations have decided to intensify their protests against the award. A meeting of the associations held in Hyderabad on December 2 has decided to go ahead with a three-pronged action plan: mobilise people against he award, mounting pressure on the state and the central governments to scrap the award and resort to legal course if needed. Political parties have also taken to the streets.