Bharatiya Janata Party (BJP) had an unprecedented clean sweep in the Vidarbha region of Maharashtra. Senior leaders of the Congress-led United Progressive Alliance (UPA), including six times MP from Nagpur, Vilas Muttemwar, Union Heavy Industries Minister Praful Patel from Gondia-Bhandara, Congress secretary Mukul Wasnik, Social Justice Minister Shivajirao Moghe from Yavatmal and Cultural Affairs Minister Sanjay Deotale from Chandrapur have been pipped by their BJP counterparts, which makes the victory all the more impressive. The troubled region, which has gained notoriety in recent years due to suicides by large number of farmers, has long been known as a Congress bastion. But since the last general elections in 2009, the BJP-Shiv Sena combine has been making inroads into the region, and this time around the party was expected to improve its position. However, the clean sweep of all the 10 Lok Sabha seats has left even seasoned observers stumped.

The flip side of the unexpected bonanza is that expectations among farmers are high and the party will have to perform fast to retain its advantage in the forthcoming State Assembly elections. This is not an easy proposition at all.

Farmers and poll observers say the BJP wave in the region was triggered by Congress-led UPA’s failure to perform on key issues. The biggest among them was the government’s failure in providing effective relief to farmers during the March 2014 hailstorm that devastated more than 2 million hectares (ha) of crops. “The aid was a pittance compared to the actual loss, and the waiver of interest on loans was a useless gesture,” says Gajanan Khatu, senior socialist leader and state executive committee member of the Aam Aadmi Party (AAP). “The aid package was huge in appearance, but it did nothing to solve the farmers’ immediate concerns regarding how to survive till the next crop is ready, and how to find the required investment for the next season.”

Another reason of anger among farmers and farm labourers, says Nilesh Heda, farmer leader from Karanja Lad in Washim district, is the failure of the Mahatma Gandhi National Rural Employment Guarantee Act (MGNREGA) and government’s failure to tie the Food Security Bill to the minimum support price. “Some 600 wells were sanctioned under MGNREGA in Karanja tehsil alone. But most farmers had to complete the wells by paying from their own pocket or by borrowing money. They have not received the payments due to them in the last two years,” says he. “One farmer even committed suicide in his MGNREGA well because of the debt.” He said that farm labourers are also angry because they had to face unemployment for three to four months every year due to the failure of MGNREGA. 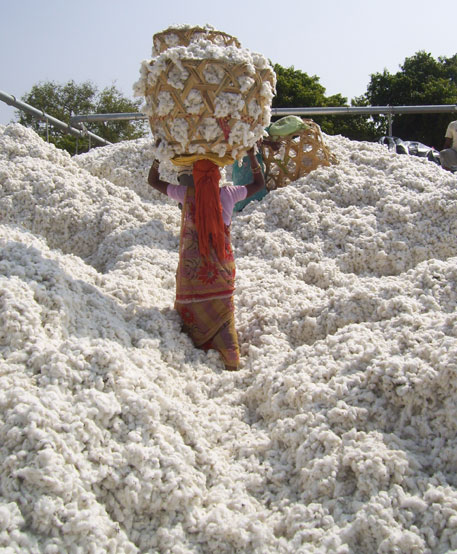 Government’s failure to announce a high minimum support price (MSP) for major crops has also led to anger among farmers, says Heda. “This year, the price of chick-pea, a major Rabi crop in Vidarbha, has fallen to Rs 2,200 per quintal (100 kg) from Rs 3,600 last year,” says he. “The Food Security Bill had raised great expectations that the government will announce MSP for food crops procured under the legislation. Though demand to this effect had been raised repeatedly in the region, it was ignored.”

However, BJP does not have any alternative plan to address the agricultural crisis, lament farmers. “I don’t think the majority of farmers have understood, or even looked at BJP’s manifesto,” says organic farmer Vasant Futane of village Rawala in Amravati district. “The fact is BJP has the same agenda for corporatisation of agriculture that the Congress had adopted. What is worse, some of its agenda are unclear. Take for example, its stand on genetically modified (GM) crops. On the face of it, BJP has taken an anti-GM stand. Whereas it has not allowed GM trials in Madhya Pradesh, GM trials were allowed in BJP-ruled Chhattisgarh.”

Khatu agrees. “During his visit to Vidarbha, Modi only talked about crop production enhancement and modern technology, which essentially is a corporatisation agenda. These policies have largely contributed to the farm crisis in the first place, and if BJP continues with them, the crisis will be worse.”

BJP’s sweeping victory in Vidarbha, however, comes with a caveat. The party’s loud promises have raised expectations of “good days to come”, and unless the party delivers quickly, the trend could just as well be reversed in the state Assembly polls, which are slated later this year.

Kishor Tiwari of Vidarbha Jan Andolan Samiti, who has been fighting for a fair MSP for cotton and other cash crops in the region, says failure to provide a fair MSP has disappointed the farmer community in a major way. “Now all eyes are on Modi’s promise of making agriculture a profitable venture by fixing MSP at 50 per cent above the cost of cultivation, as recommented by the Swaminathan Committee which has been a long standing demand in our region,” Tiwari says. “Giving fresh crop loans to crisis-ridden and debt-trapped farmers is also high on the list of expectations.”

This, however, is easier said than done. “Issues are complicated in Vidarbha. Resolving its agricultural crisis is going to be quite a handful for the new government,” says Heda. “Only time will show if BJP succeeds in making an impact or only ends up repeating UPA’s mistakes.”