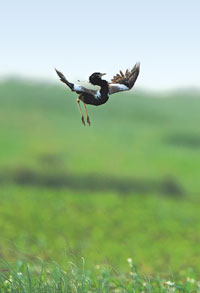 Terrestrial species are shifting their home ranges because of climate change much faster than what was estimated. The fifth assessment report of the Inter-government Panel on Climate Change (IPCC), released on March 31, says many terrestrial species have moved 17 km towards the poles and 11 m up in altitude per decade on a global average. The range shift is two to three times faster than previous estimates, says the report.

The shifting of ranges is one of the ways through which species adapt to climate change as they constantly tend to move towards climatically suitable areas. For instance, they shift towards the poles or to higher altitudes to adjust to global warming. Species with short life cycles and high dispersal capacity, such as butterflies, are generally reacting to the climate change by shifting home ranges more effectively than longer-lived species or those with more limited dispersal such as trees. There are several species for which detection of range shift and its attribution to climate change have not been properly studied yet, says the IPCC report.

As the home range shifts due to climate change, current legal frameworks and conservation strategies face a big challenge, says the report. The range shifts will affect ecosystem functioning, potentially posing risks to ecosystem services, including those related to climate regulation and carbon storage. Besides, many newly arrived species prey on, outcompete or hybridise with existing biota, for instance by becoming weeds or pests in agricultural systems, warns the report.

Assisted colonisation or moving individuals or populations from currently occupied areas to locations with higher probability of survival, may emerge as a potential conservation tool for species which are unable to adapt to changing climates, says the report. “As target species and ecosystems move, protected area networks may become less effective, necessitating re-evaluation and adaptation, including possible addition of sites, particularly those important as...migration corridors,” it adds. The challenge would be “of untangling desirable species range shifts from undesirable invasions, and identifying circumstances when movement should be facilitated versus inhibited.”

Climate change and its impact on biodiversity; some management options for mitigation in Arunachal Pradesh

Species and climate change: More than just the Polar Bear