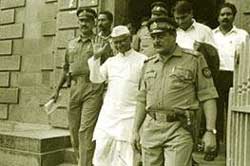 Keeping in mind Hazare's contribution to the welfare of society, additional chief metropolitan magistrate K H Holambe Patil offered to suspend his order and instead asked Hazare to furnish a bond for Rs 5,000 and give an undertaking of "good behaviour" for two years to the court.

In an exclusive interview with Down To Earth (DTE) Hazare defended his refusal to give an undertaking. He deliberately made charges against Gholap because somebody had to take the initiative against corruption.

"I had evidence against the minister but it was not sufficient to prove the charges," he said.

"The judge asked me to file a bond that 1 will not speak against anybody for two years. I think it is against rny right to freedom of speech," he added. Hazare was convicted under Section 500 of the Indian Penal Code for stating in an interview to the Marathi newspaper Naavakaalin September 1997 that Gholap was found guilty of corruption by the Anti-Corruption Bureau (ACB). Hazare had blamed the minister of corruption in the case involving purchase of powerlooms by the state government corporation. Hazare's counsel P Janardhan contended that the ACB inquiry had established that the power looms worth Rs 4 crore were purchased to favour a company and the looms were lying idle. The said corporation was directly under the minister when the deal was struck. But Janardhan could not conclusively establish the minister's involvement in the deal.

Anil Sharma, social activist from Ralegan Siddhi, told DTE that corruption, which was rampant in the system, had become even more deep-rooted since the Shiv Sena government came to power.

"Even in the past Anna had unearthed several corruption cases in the present government," Sharma said. He had earlier levelled charges against two ministers, Mahadeo Sbivshankar of the Bharatiya Janata Party and Shashikant Sutar of the Shiv Sena, following which Maharashtra chief minister Manohar Joshi set up the Puranik panel which found some evidence against Sutar. Accordingly, the chief minister sacked Sutar and appointed the M L Dudhat commission to probe charges against the Sena minister. However, the Dudhat commission acquitted Sutar of all charges.

"After this episode (Hazare's imprisonment) there is a sense of great injustice in the minds of the people,"says Sujit Patwardhan of Parisar, a non-governmental organisation (NGO) in Pune. According to him the whole system has become rotten.

"The guilty has been spared while a sanyasi has been punished," says Ashok Tanurkar of the Bhrastachar Virodhi Jan Andolan, a NGO headed by Hazare.

According to Digambar Pathak of the same organisation, a nationwide agitation will be launched from Nasik against Gholap from October 2.

According to Thakaram Raut, principal of Shri Sant Hilobaray Vidyalaya, Ralegan Siddhi, the government cannot hope to deter Hazare's followers by doing what it has.

"If the government thinks that they will be able to deter social workers from their duty or weaken the base of the NGO movement then it is mistaken," he said.

Meanwhile, in Delhi, some NGO representatives and concerned citizens joined the Centre for Science and Environment in expressing concern over Hazare's arrest. "The sentence passed on Hazare has implications for many concerned citizens of the nation. In the Seymour Hershe-Morarji Desai incident, when the American journalist accused Desai of being on the rolls of the us Central Intelligence Agency, Desai could not win the case of defamation against Hershe. In such instances, the malafide intent of an accusation has to be proved. Gholap should also have proved the malice in Harare's accusation," the statement noted.