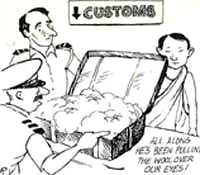 Wildlife officials recently disclosed they had confiscated a 100 kg consignment of the wool of the endangered Tibetan antelope in June. The contraband, which was seized in New Delhi, had been smuggled in from Nepal. Authorities estimate 2,000 kg of the wool was smuggled into Leh and Srinagar last year, eventually finding its way to the Tibetan settlement of Majnu-ka-Tila in Delhi, strengthening evidence on the active involvement of some Tibetan refugees in the illegal wildlife trade.

Unaware that it is illegal, customs and control officials have so far been freely allowing the movement of the wool, despite the fact that the antelope is included in Schedule 1 -- the highly endangered list -- of the Indian Wildlife Protection Act.

American wildlife conservationist George Schaller first noted in December last year that the animal is on the point of extinction in Tibet. The Chinese government has been charged with allowing hunting tours for wealthy foreigners who pay upto $35,000 for an antelope hunt. Shawls made of this wool are commonly available in north India. A shawl of about 450 gm (one antelope yields only 150 gm wool) fetches anything between Rs 25,000 and Rs 75,000. In European markets, it could earn as much as $8,500.

Complains Ashok Kumar, director of the Trade Record Analysis of Flora and Fauna in Commerce-India -- a division of WWF-India, "Despite our repeated appeals, the Indian government has not even banned the commercial sale and display of these products."