Sea ice extent on September 17 was measured at 1.94 million square miles, which is 463,000 square miles below average 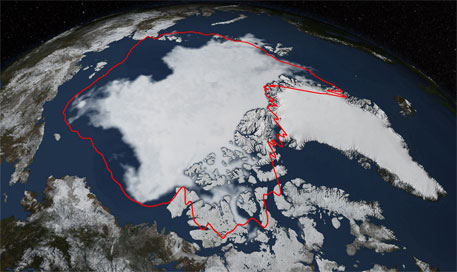 The ice cover in the Arctic sea shrank to its summer minimum—and sixth-lowest level on record—on September 17, according to data released on Monday by NASA-supported National Snow and Ice Data Center (NSIDC) at the University of Colorado, Boulder.

“Arctic sea ice coverage in 2014 is the sixth-lowest recorded since 1978,” says Walter Meier, a research scientist at NASA’s Goddard Space Flight Center. Sea ice extent on September 17 was measured at 1.94 million square miles (5.02 million square kilometers), which is 463,000 square miles below average. September is the month when Arctic ice reaches its lowest “extent” of the year, at the end of the Northern Hemisphere summer. Sea ice is frozen ocean water that melts each summer and refreezes each winter. It acts as an air conditioner for the planet, reflecting energy from the sun. “Even with a relatively cool year, the ice is so much thinner than it used to be,” Meier said. “It’s more susceptible to melting.”

To measure sea ice extent, scientists include areas that are at least 15 per cent ice-covered. The NASA-developed computer analysis, which is one of several methods scientists use to calculate extent, is based on data from NASA’s Nimbus 7 satellite, which operated from 1978 to 1987, and the US Department of Defense’s Defense Meteorological Satellite Program, which has provided information since 1987. In addition to monitoring sea ice from space, NASA is conducting airborne field campaigns to track changes in Arctic sea ice and its impact on climate.