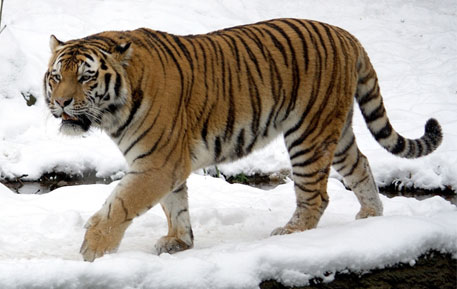 The world of tiger conservation is abuzz after the World Wide Fund for Nature (WWF) released a camera-trap recorded video showing an Amur tigress with her two cubs deep inside north-eastern China.

According to a report by British daily The Guardian, the video shows the mother Siberian tiger and her two cubs playing in thick birch forest in Heliongjiang province, 30km from the Russian border.

Today, only 450 Amur tigers (Panthera tigris altaica) are found in the Russian Far East. They were wiped out in China 65 years ago. Over the years, they have been spotted inside Chinese territory, but this is the first infrared video evidence of them so far inland, where only paw prints have been recorded previously.

“It is confirmation they are re-establishing, they are not just animals coming in and out from Russia,” said John Barker, Asian programmes leader at WWF. He said that all the signs indicated the tigers were breeding in China, though it was too early to say for certain.

However, Barker cautioned against over-exultation. “We shouldn’t get hysterical over one video. There’s a long, long road ahead. But the opportunity is there. If the government, civil society and communities can work together, there’s no reason there shouldn’t be a sustainable population of tigers again in China.”