Are lawyers game for cycling to court?

The remark by Chief Justice of India, Justice R M Lodha, that lawyers should start cycling to work has created a flutter in the legal circles. The chief justice said this when he was approached by the bar association for a solution to the acute parking shortage around the court premises. Will his remark nudge lawyers to take the environment-friendly route to commuting? Here's what lawyers have to say about the suggestion 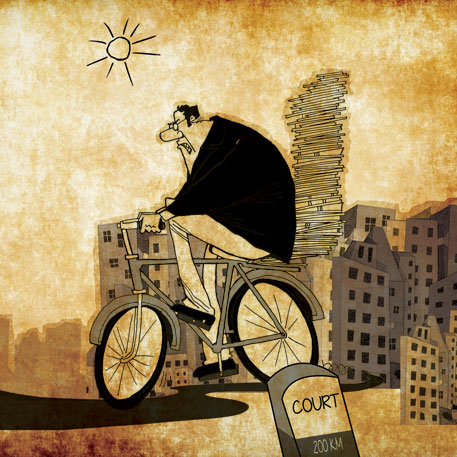 This is a welcome statement from the Chief Justice of India. Supreme Court has become one of the biggest concentrations of luxury cars in the city. Taking their cues from observing senior advocates, junior counsels begin to perceive very early on that they must also afford the best possible cars as an important marker of the status of a lawyer.

Some members of the bar must take the initiative of cycling to court. This will set an example and encourage others to do the same.

To be sure, there are practical hurdles. Many lawyers stay far from the courts, Delhi roads and Delhi weather are both not best suited for cyclists, and lawyers, typically, have many briefs to take to court everyday. But a beginning can be made, specially by those who stay close or have offices close to the court complex.

Cycles will be environment friendly and healthy for the lawyers. Their popularity may also remove the perception of luxury cars as a valid professional differentiator among lawyers from different backgrounds.

It's a good and healthy initiative. I appreciate the suggestion. But the only problem is distance. I live in Noida. It is hard to think of riding a bicycle to reach Supreme Court. If the distance can be managed, such initiative would be picked up soon and become a fashion.

I am game for good exercise as long as arrangements can be made to transport my files to court from my home in Noida. The parking situation  around Supreme Court is problematic and the observation of the Supreme Court is in response to that.

We are not living in Europe or China. Look at the road conditions in India. Is somebody going to come from Noida to Supreme Court on a cycle? This is not a good suggestion.

CJI was not very serious when he said that. Perhaps, what he meant was that the number of cars should be reduced to solve the problem. We have had judges who would come to court in bicycles; for example, Justice Rajinder Sachar. If judges really want that people should come to court on a cycle, they should first start coming on a cycle and we would follow them.

I was in the court when CJI said this. It was on a lighter note. During court proceedings, several comments are made in a lighter vein, which are not meant to be taken seriously. Cycling to court from far off places like NCR with our coats, bags and documents, with such roads, environment and temperature conditions is just not practical.