With hardly any rains in June, no sowing activity has taken place in many regions, making it impossible for farmers to insure crops 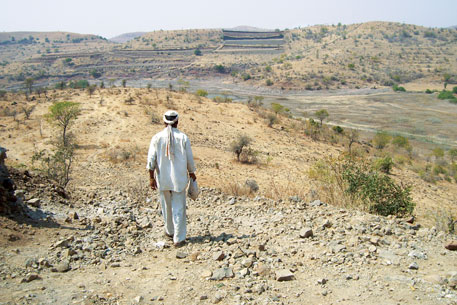 Maharashtra government has refused to extend the time-limit for availing the Weather-Based Crop Insurance Scheme (WBCIS), which is being implemented for the first time in 12 districts of the state this year, despite heavy demand from farmers. The time limit for the scheme, which  covers orchard crops and a few cash crops like cotton and soybean, with four crops being covered in each district, was exhausted on June 30, but because of delayed rains and the impending threat of drought, farmers are eager to get their crops insured. However, in an order issued on July 1, the state agriculture department has said that farmers who have failed to register themselves under the scheme should go for the ordinary production-based insurance scheme for kharif crops,  the deadline for which is July 31.

Farmers, however, have called this unfair, because the “saat bara” document – an official document showing ownership of land and cropping pattern for the year – for the current year is not issued by the tehsil office unless the sowing for the year is completed. “With hardly any rains in June, no sowing activity has taken place anywhere in my area,” farmer Latabai Bari of village Shirsoli in Jalgaon district told Down To Earth. “How can farmers go for insurance without the saat bara form?” Bari called the refusal to grant extension absurd and said that at least 15 days' time has to be given for farmers to complete their sowing, get the required document and apply for insurance.

Many farmers said they were not aware of the deadlines for registration. “The crop season is a busy time, and farmers do not have time to go to banks and get information,” said Shahaji Kadam from village Dagdi Baradgaon in Ahmednagar district, “I was not aware of the June 30 deadline, and my grape crop remains uninsured.”

Initially, WBCIS was announced as a compulsory scheme. However, in many places farmers protested against the provision because of the limitations of the scheme in terms of risk coverage, following which many banks have taken ad-hoc decisions to implement it on a voluntary basis, informed farmer leader from the Shetkari Sanghatana, Vijay Jawandhia, from Wardha.

“Initially farmers were against the scheme, but now, in view of the drought situation, large numbers of farmers feel that they should register,” said Jawandhia. “While this may be confusing behaviour, it is also true that it is impossible for farmers to get any insurance without the “saat bara” document. In view of no sowing having taken place, it is only fair that government should extend the deadline.”

However, he added that there is a lot of confusion as to what exactly is going on with regard to insurance. “In Wardha, where WBCIS is the only insurance scheme available, the guardian minister has made a media statement saying that the deadline has been extended till July 15,” he said, “It is proving very confusing for farmers, who are not sure what is going on.”
State Agriculture Commissioner Umakant Dangat said, “WBCIS is an experimental scheme, which is being implemented on the basis of historical data, and its criteria are fixed. Hence it is not possible to extend its deadline under any circumstances.”

Orange cultivator from Katol town in Nagpur district and secretary of the Maharashtra Orange Growers’ Association, Manoj Jawanjal, said that farmers rushing for the scheme because of the drought situation. “The terms of the scheme, especially for orchard crops, include low rainfall between June 15 and July 15. Hence it is unfair to expect insurance companies to accept fresh insurance applications till the end of that time period.” He said that he too had also failed to get his orange crop insured.

P K Mishra Committee Report: Report of the Committee to review the implementation of crop insurance schemes in India

CAG Report: Report of the Comptroller and Auditor General of India on management of irrigation projects (Maharashtra)

Report: Towards resilient agriculture in a changing climate scenario