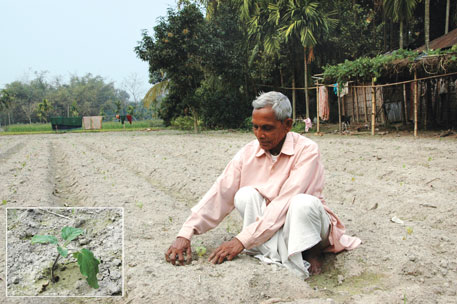 Asia is increasingly becoming a hub for trial of genetically modified (GM) crops. Bangladesh has allowed cultivation of Bt brinjal. India, does not cultivate genetically modified food crops, but is growing Bt cotton. The newest entrant to the list of countries struggling with the issue is Pakistan.

In May, Pakistan’s federal government was ordered by the Lahore High Court to stop issuing licences to genetically modified cotton and corn seeds until a mechanism was established to assess the new genetically modified organisms (GMOs) being developed every day. But the victory for anti-GM crusaders was short-lived because the government appealed against the order and got it suspended on June 26.

Earlier, in March, the Pakistan government had approved sale of 23 varieties of GM cotton and 14 of GM corn seeds. Of the 14 corn varieties approved, MIR162 and MON810 are banned in China and parts of the European Union.

Among the countries of the Indian sub-continent, Bangladesh was the first one to cultivate a genetically modified vegetable when it allowed Bt brinjal in January this year. Bangladesh’s National Committee on Bio-safety had allowed the cultivation of four GM varieties of brinjal—Kajla, Uttara, Nayantara and ISD006 last year.

The crop was banned in India in 2010 after widespread protests. In October 2012, a committee of experts from top laboratories and research institutions, set up by the Supreme Court, had recommended a 10-year ban on trials of Bt transgenics in India. The same committee in its final report suggested virtually an indefinite moratorium. But the manifesto of the Bharatiya Janata Party, the main party of the newly elected National Democratic Alliance government at the Centre, indicated it was open to rethinking the issue.

Another country struggling with the question of using GM crops is Nepal. In January, the supreme court of Nepal temporarily banned import of GM seeds. The decision was celebrated by many. Trials on Bt brinjal are also banned in the Philippines since 2011.

Bhutan chooses organic path
One country which has been unambiguous in its policy is Bhutan. The Biosafety Bill of Bhutan 2014 prohibits “Import, transit, intentional introduction, any use including contained use, research and development that involves GMOs capable of reproducing and any other genetically modified biological material capable of reproducing”. However, it exempts “traditional and domestic methods of animal and plant breeding, other similar methods which do not involve the use of modern biotechnology and products derived from GMOs for pharmaceuticals for human and veterinary use”. The law virtually aims to make the country 100 per cent organic.

Genetic modification of a crop means changing its genome through bioengineering for different requirements, for example to make it pest-resistant or drought-resistant. Though there have been almost no cases of disease or death due to GM crops, allergic reactions have been reported. Overall, the opinion on health benefits of GM crops remain inconclusive.

Use of GM crops has other implications too. There is a fear that genetically modified crops could destroy the natural seed bank and make farmers dependent on multinational firms. Also, companies can sue anyone who uses a patented seed without permission, even if the use was due to accidental contamination. For these reasons, even the experts who support use of GM crops say it should be done with extreme care.