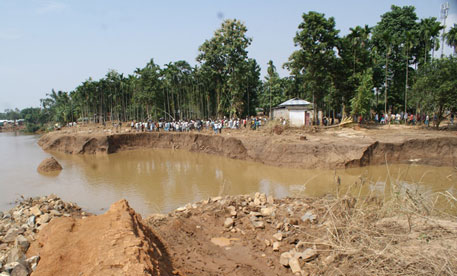 Caught ham-handed in the flood that devastated Assam and Meghalaya last month, both the state governments have appealed to the Centre for immediate assistance.

Meghalaya Chief Minister Mukul Sangma submitted a memorandum to the Centre, seeking Rs 2,000 crore to tide over the situation caused by unprecedented flood and landslides. “We need financial assistance to rehabilitate the people and rebuild public and private infrastructure damaged by the floods,” he told Down To Earth. He added that an overall assessment of the damage will be done once the floodwaters recede.

Assam Chief Minister Tarun Gogoi, on the other hand, requested Union Home Minister Rajnath Singh to help the state government tackle the problem of soil erosion in the state. “Flood causes a temporary setback but erosion causes permanent damage. In the past 50 years, 400,000 hectares (ha) have been gobbled up by the Brahmaputra and Barak rivers, with the rate of erosion being 8,000 ha every year,” he said. The Assam government has been emphasising reclamation of land to minimise the pressure on the existing land in the wake of increasing population in the state, Gogoi added.

The chief minister also requested Singh for three additional battalions of the National Disaster Response Force (NDRF) for the Northeast, two exclusively for Assam. “There is a need for permanent stationing of NDRF personnel in the flood-prone areas of the state so that they can reach out to people at the time of exigency,” Gogoi said.

Through a memorandum submitted to the Union home minister on October 1, the Assam government sought an assistance of Rs 2,010crore for damaged infrastructure, which include roads and bridges, houses, health centres and school buildings, Rs 660 crore for rescue and relief operations and Rs 6,700 crore as special assistance, which includes Rs 3,500 crore for raising and strengthening of embankments.

Civil society groups, however, have called the visits by the leaders to the flood-affected areas and memorandum seeking assistance in the form of funds eyewash. Speaking to Down to Earth, Akhil Gogoi of the farmers’ activist group Krishak Mukti Sangram Samiti said this is nothing but a technique to try and silence the public and the flood victims. He alleged that huge funds are sanctioned every year in the name of flood control and rehabilitation but nothing has happened because of rampant corruption. He doubts if allocation of the full amount will make any difference. “There could be rampant corruption with these funds as well, so strict monitoring will be required on how the funds are utilised,” he added.