Protests against dams are snowballing into a political movement in Assam 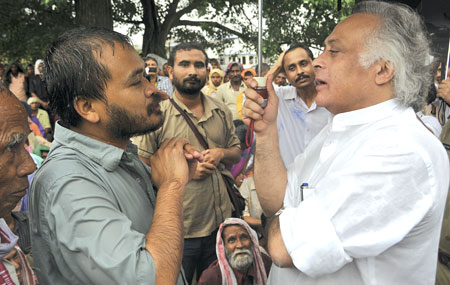 ASSAM is on the brink of a movement, like the one that ended with the 1984 Assam Accord. This time the concern is not illegal immigrants but dams proposed upstream in Arunachal Pradesh.

In the past year and a half people in Assam have held a number of protests. The latest one was on September 10 when Union Minister of Environm ent and Forests Jairam Ramesh visited Guwahati to consult academics, activists and student and political leaders on large dams, particularly a mega hydel project under construction on the Subansiri, a tributary of the Brahmaputra. The 2,000 MW Subansiri Lower Project is the biggest of the three dams under construction in Arunachal Pradesh.

At the heart of the protest and Ramesh’s visit is the impact on Ass am of the dams planned in Arunachal Prad esh. The state has signed 168 memoranda of understanding with private and public companies to develop hyd ropo wer (see ‘Electric rush’, Down To Earth, May 15, 2008). These projects are on the Brahmaputra and its tributaries. “Aru nachal Pradesh is set to gain reve nue from these projects, but Assam will be the victim if anything goes wrong,” said Samujjal Bhattacharya, adviser to AASU.

Dams in Assam got politicised after work on Subansiri Lower began in 2005. Till then discussion regarding dams was limited to academics and a handful of ecological activists and lawyers. In 2004, the Supreme Court had allowed Subansiri Lower but banned more dams on the Subansiri because no one had assessed their cumulative impact downstream. The following year AASU led protests in Dhemaji and Lakhimpur districts demanding an assessment of the impact of Subansiri Lower. The agitation led to a tripartite meeting between AASU, NHPC (the company building Subansiri Lower) and the Assam government in December 2006, said Bhat tacharya. At the meeting it was decided that a team of experts from Gauhati University, Dibrugarh University and IIT Guwahati, would assess the downstream impact. 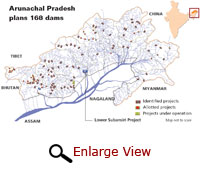 On June 28, 2010, the team recommended lowering the height of the dam and making technical changes in its structure to increase river flow (see ‘Reduce Subansiri dam height: panel’, Down To Earth, July 31, 2010). “So far AASU has only demanded downstream study and equally emphasized that it is not per se against dams. Till the submission of the expert committee report it was yet to take a stand on whether it opposes big dams,” said Arupjyoti Saikia, professor at the department of humanities and social sciences, IIT Guwahati. But the organisation that claims to represent farmers and fishers in the state, KMSS, has made it clear it will not allow dams in Arunachal Pradesh.

Akhil Gogoi, its president, claims the support of nearly 500,000 fishers dependent on the Brahmaputra. He said his outfit will agitate peacefully but as a last resort would not hesitate to block roads leading to Arunachal Pradesh. Initially, concerns of downstream imp act did not evoke much response from political parties. On two occasions, in 2007 and 2008, the concerns were raised in the Assam Assembly but no party showed interest, said AGP MLA Girindra Kumar Baruah.

In July last year, the opposition forced the minister of power and industry, Pradyut Bordoloi, to re ply to a calling attention motion on Subansiri Lower. A debate on big dams ensued, with emph asis on Subansiri Lower. “The treasury benches joined to raise concerns about downstream impact,” said Membar Gogoi, Congress MLA from Teok. After the debate the Assembly decided to set up a multi-party panel to look into the impact of Suban siri Lo wer and Ranganadi hydel proj ect in Arunachal Pradesh. The committee, chaired by Membar Gogoi, submitted its report on July 17, 2010. “We have asked NHPC to stop work till it acts on the recommendations of the expert team (set up in 2006),” Membar Gogoi said.

The sudden surge of political interest in dams is because of two reasons: Assembly elections in 2011 and growing anti-dam agitation. Today about 40 organisations in districts downstream of the Subansiri reservoir are working against mega dams. “No political party wants be seen as a supporter of Subansiri Lower,” said a senior AGP worker.

But the state government is in a bind. On the one hand, elections dictate it respect the popular sentiment. On the other hand, it cannot go against the Congress-led government at the Centre which wants dams. Although the Assam power minister presided over the 2006 meeting between AASU and NHPC that led to the setting up of the expert group, the state government refuses to acknowledge the group’s report as official, said a po wer department official. The government has only now, after se eing the AGPled opposition, decided to opp ose dams in Arunachal Pradesh till dow nstream concerns are addressed, he added. 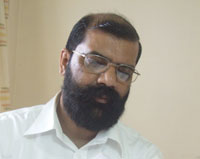 AGP sees votes in opposing big dams. Baruah believes the dams will become a big issue in elections, especially in the districts immediately downstream of Subansiri Lower, including Lakhimpur and Dhemaji. In January this year, the party held consultations in Guwahati to understand downstream effects. According to witnesses, former chief minister and AGP leader Prafulla Kumar Mahanta sat for two days listening to activists and academics. “First, it was difficult to explain party leaders the downstream worries, but after two days they were co nvinced the issue could get them votes,” said an academic who was part of the consultations. AGP has followed up the talks with a rally near Subansiri Lower at Gerukamukh in Lakhimpur in September.

The Assam government is catching up. In August while addressing the power ministers of the north-eastern states in Shillong, Bordoloi expressed anguish over wanton building of dams. According to sources close to the minister, a day before the meeting Bordoloi was tutored by the expert group that had recommended lowering the Subansiri dam’s height. Bordoloi, who is also the spokesperson for the state Congress, has since become more vociferous in his critique. Recently, writing in a national weekly, Bordoloi criticised the Arunachal Pradesh government for signing contracts with fly-by-night operators for building dams without a comprehensive assessment of the fallouts.

According to sources in the power ministry, the Assam government is trying to implement the report of the interministerial group on hydropower in north-eastern states. The report, published in February this year, recommended sub-basin level studies for the Subansiri and Dibang rivers by the Cen tral Water Commission. Neeraj Vagho likar of Kalpavriksh Environ mental Act ion Group in Pune, who is working on dams in the Northeast, said sub-basin level studies are mere academic exercises because the group’s report state’s clearance of projects on these rivers will not be held up till the studies are completed.

Even as Ramesh left Guwahati with the promise of assessing cumulative downstream impact before clearing dams, a storm is brewing on the banks of the Brahmaputra in Tezpur. A barge with turbines for the Subansiri Lower is stationed at Jahaj Ghat. It cannot be taken to the dam because KMSS and AASU have threatened an agitation. Tu laram Gogoi, president of the Lakhim pur unit of AASU, said people are on standby. They will hold sit-in on the highway linking Te zpur to Itanagar in Arunachal Pradesh if the state administration or NHPC tries to move the turbines before the recommendations of the expert group are followed.