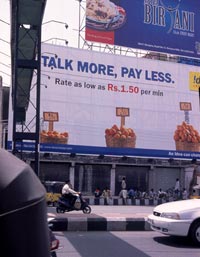 "Talk more, pay less," suggests a billboard. A cellphone company is associating lower talktime rates with the amount of mangoes you buy. If you are a reporter trying to find why hundreds of indebted farmers have killed themselves in Andhra Pradesh (ap), the irony, in several square metres of neon-illuminated advertising space, is too unsubtle to miss. Hyderabad, with some of the largest billboards in India, is an instruction in advertising (read propaganda). Here's an anti-hiv/aids message: "Condom. Anti-virus softwear."

Called Cyberabad, Hyderabad is a city with a virtual reality of its own. But the local area network of this computer city is littered with viruses and Trojans -- dregs of a grim reality. There are road intersections with patches of Mexican grass. On the manicured green sleep the homeless, the migrant labourers who couldn't find jobs that former chief minister Chandrababu Naidu's Vision 2020 promised. Negotiating the traffic nearby is a Ferrari sports model, its hallmark scarlet a stark contrast to the green Mexican grass.
The emphasis on transport is ubiquitous. After every couple of kilometres on the highway leading to Anantapur -- a district where 336 farmers committed suicides in the past four years -- a message appears: "Roads indicate the culture of a nation." Adding unintended meaning to it are figures of farmers and their bullocks, tired after the day's work. "The trouble is with the 'culture' after 'agri'," I hear later from an office bearer of a group that represents rich farmers and the industry. "It should be renamed agribusiness. The romance of agriculture is harmful. What you have, then, is good agriculture and poor farmers."

ap is a crash course in all that is wrong with India's farm sector. Some lessons of this course cannot be adequately represented in conventional reportage. I learnt one such lesson in Warangal town at 3 am. After a torturous road journey lasting eight hours, we found that there were no rooms available in any hotel. "Marriage season?" I asked a sleepy receptionist, drawing from past experience. "No," said he, retreating into a sheet spread out on the reception counter, "Sowing season."

An hour of search yielded a lodge that wasn't deemed good by seed companies. The next day, a friend got me a room in a hotel. "Which seed company do you represent?" a man asked me in the lobby. During the sowing season, seed companies book all the hotels and go on a sales and marketing blitz. They return before the harvest, when the crop is in bloom. They hire buses and taxis to cart farmers to fields where their seeds have been planted. Of course, the trips are never organised to fields where seeds fail to germinate.

I ask a friend, an agriculture scientist, how these companies develop their hybrid seeds. He narrates an anecdote about a plant breeder in the public sector who wanted to join a private seed company: "They asked him what parental lines and research he would bring along with him. When the plant breeder said that was unethical, the company told him that they would rather hire the director of his institute, who would be more willing to let them have the product of years of research funded with public money." I want to meet this man, this ethical anomaly in public sector agricultural research. But I also have to meet several families, learn how their breadwinners committed suicide and find links, if any, between the government's calculated neglect of agriculture and the stories of the suicides.
My photographer colleague observes that the two of us are getting our work done at the cost of acute discomfort to these families. We invade their privacy, ask them all kinds of personal questions and raise their expectations for help. Yes, the families do expect help, even if they don't ask for it (and no family actually asked us). "If we do a good job on this story, we would be helping them, wouldn't we?" I try to be self-delusive for a bit, only to realise our limitations and the scale of the tragedy, immediately. And then we reach a village where a woman had killed herself after an altercation with her son. My guide checks up and tells me that the village was preparing to testify that she committed suicide due to indebtedness and crop failure in order to get the relief package.

My teachers never told me that journalism also needs a willing suspension of disbelief.