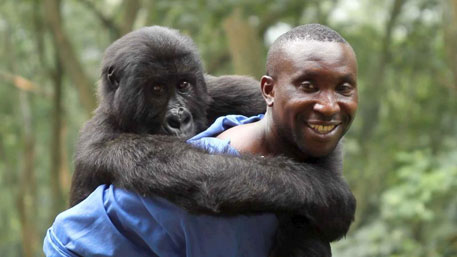 A film by legendary filmmaker David Attenborough has raised urgent concerns over the threat to Virunga, a UNESCO World Heritage Site that is home to some of the world's last mountain gorillas.

Titled Virunga, the film charts the efforts of protecting one of Africa's oldest national parks and its gorillas from a number of threats, including the advances of Soco International, an oil and gas exploration and production company. The film (Leonardo DiCaprio is its executive producer) will be released on November 7 for Netflix subscribers.

“Virunga is the incredible true story of a group of brave people risking their lives to build a better future in a part of Africa the world's forgotten and a gripping expose of the realities of life in the Congo,” says the film’s website.

Earlier, in September this year, a report by non-profit Global Witness, titled “Drillers in the Mist”, had showed how secret payments and a local climate of violence helped Soco open Virunga to oil. “Areas like Virunga were established as World Heritage Sites because they are sites of great scientific and natural value not only to the nations in which they are situated but to the whole world,” says Attenborough in a press release.

The 7,770-square-kilometre Virunga has more species of birds and mammals than any other African national park. "We should not forget that at the centre of this controversy lies a British company that trades on the London Stock Exchange. The allegations raised by the Virunga film and Global Witness deserve a serious response from Soco, and merit investigation by law enforcement authorities in the UK, the US and other relevant jurisdictions," adds Attenborough.

Oil giant Soco, however, has said that it "does not condone, partake in or tolerate corrupt or illegal activity whatsoever”.