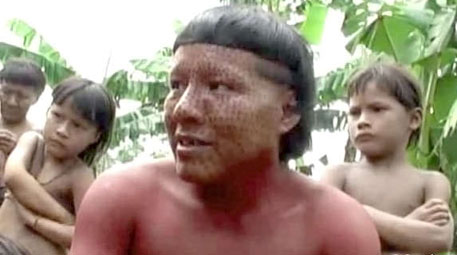 An Australian TV report that branded the Suruwaha, one of the most ancient Indian tribes living in the Amazon rain forests of Brazil, as “child murderers” have irked tribal rights activists. On March 4, Australia's Channel 7 featured Amazon adventurer Paul Raffaele and its reporter Tim Noonan visiting the Suruwaha reserve in Brazil.

According to a press release issued by Survival International, an international non-profit working for the rights of indigenous people worldwide, the report wrongly portrayed the Suruwaha as the “worst human rights violators in the world” and described the Indian tribe as “a true suicide cult”, “Stone Age people”, and “lost in time”. The tribe is said to “encourage the murder of disabled children…in the most gruesome way possible”, take “poor little innocent babes into the jungle to be eaten alive by wild beasts” in the report, alleged the non-profit.

The Suruwaha are isolated from the mainstream world and live in the Purus river basin in Brazil’s Amazon rainforest. They number about 140 people. Largely self sufficient, they hunt game, fish, and cultivate fruit and vegetables in their gardens. Their land has been officially mapped out and protected by the Brazilian government’s Indian Affairs Department. Only a handful of government officials and scientists are granted access to their land.

“The Indians allowed the Channel 7 team into their territory after Mr Raffaele said he wanted to film a positive report.” However, this is “one of the most biased, misleading and disgusting reports we’ve ever seen. It depicts tribal people on TV as primitive, backward savages,” said the organisation.

The organisation has quoted Paul Raffaele saying a Suruwaha girl refused to shake his hand because she wanted to kill him. In fact, he was wearing so much sun cream, the Suruwaha thought he had a skin disease. The orgainsation has launched a campaign “Freakshow TV”, aiming to challenge the depiction of tribal people on TV as primitive and backward savages.

The Suruwaha have already been targeted by fundamentalist missionaries, who falsely say they regularly kill newborn babies. The missionaries have lobbied with Brazil’s Congress to pass a law allowing Indian children to be removed from their families.