Australia’s emissions projected to double by 2050 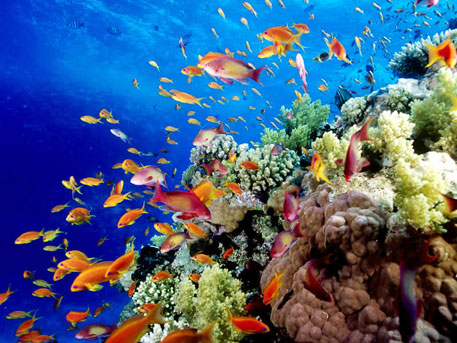 More than 85 per cent of rivers in Australia have been modified due to irrigation, dams and other development pressures

Of the sixty-eight zones of the Murray-Darling Basin, Australia’s most significant agricultural region, only one zone is rated in good health

Concentrations of greenhouse pollution in the atmosphere are higher than any time in the last 800,000 years, and emissions are projected to increase by 50 per cent by 2050

Two degrees of climate warming will likely mean the loss of most coral cover on the Great Barrier Reef, 80 per cent of freshwater wetlands from Kakadu National Park, and Queensland’s tropical forests It is estimated that by 2050, increases in climate change-related bushfire damage in southeastern

Australia will have cost an additional US $1.5 billion per year (over and above the costs if no climate change took place)

Each Australian family contributes enough rubbish each year to fill a three-bedroom house from floor to ceiling, and the total amount of waste generated in the future is projected to increase

The health costs of air pollution in Australia are estimated to be in the order of US $11.1 billion to US $24.3 billion annually

Since 1985, more than half of the coral cover of the Great Barrier Reef has been lost

At least 50 per cent of all wetlands in Australia have been drained, filled or destroyed

About 1,259 plants, 396 animals and 67 ecological communities are listed as threatened by the Australian government

Invasive species have significantly contributed to extinctions in most regions of Australia, including more than 40 native mammals, birds and frogs

By 2100, Australian population is projected to be between 42 and 70 million people

Total consumption per person in Australia is one of the highest in the world, and is projected to increase by up to 27 per cent by 2030, with far-reaching impacts on nature including biodiversity, land use, climate and water

By 2050, energy consumption in Australia is projected to increase by around 21 per cent, with only 14 per cent coming from renewable sources