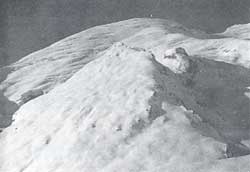 FOR people inhabiting the higher reaches of the Himalaya, life is tough. The terrain is difficult and an extreme cold pervades the area through the year. To top all this, whenever it snows, a fear of avalanches invades every heart. Now, steps are being taken towards mitigating this apprehension and as early as next year, automatic, all-weather stations could help in avalanche forecasting.

The automatic weather station project system is being developed by the Snow and Avalanche Study Establishment (SASE), a research institute under the Defence Research and Development Organisation, at Manali in Himachal Pradesh. Scientists at SASE started work on the project last year and plan to set up 400 automatic weather stations all over the Himalaya.

Crucial to the prediction of avalanches is data on snow density. The higher the density of snow, the greater the bonding between snow grains and hence, the fewer the chances of avalanches. Presently, data on snow pillows and snow depth -- which determine snow density -- and wind speed and direction, relative humidity, solar and other radiation are collected manually from 29 research stations spread over Jammu and Kashmir and Himachal Pradesh. On the basis of this information, SASE issues regional forecasts that are broadcast regularly on radio and television. But the logistics of keeping these stations staffed in inhospitable weather and terrain the year round is proving to be expensive. Says S G Nair, associate director of SASE, "Our idea is to replace these stations with automatic ones, or at least supplement them."

In a trial scheduled till May 1995, 5 stations have been set up to iron out gestation problems and 5 more are to be installed, including one at Siachen Glacier, where Indian troops face avalanche threats the year round. Each automatic station has a data collection platform (DCP), which processes the data and transmits it via the INSAT 2A satellite to the SASE base. The DCPs, manufactured by a Vadodara-based company, collect data from the sensors every minute, process and store it. The transmitting unit, plugged to the DCP, relays the data hourly to INSAT 2A.

Each station has 7 sensors to collect data. The installation of the first 5 DCPs cost Rs 60 lakh, while the cost of installing the remaining 5 has dropped to Rs 23 lakh.


The station is powered by solar-charged batteries and can function continuously for a week even in the absence of sunshine. But, says Nair, "We haven't yet faced a situation where the batteries have failed us due to the lack of sunlight." The DCPs also have a data storage capacity of 6 months and a facility whereby the base headquarters can monitor the station.

However, some problems have cropped up with the batteries, the sensors and the frequency at which data is transmitted -- all because of the extreme cold. But scientists testing new equipment designed to function at temperatures of -400C and even lower, say the results are encouraging.

The engineers claim that once this wide network of unmanned stations is operational, the accuracy of avalanche prediction will be as high as 95 per cent compared to the current 80 per cent. Says L R Sharma, a scientist at SASE, "At the moment, our forecasts are limited to major arterial road networks like the Jammu-Leh highway. As the station network spreads, we plan to include minor roads and interior regions in the hills."

Good news, no doubt, for the mountain divisions of the Indian army, the hill people and those planning a summer getaway to Leh or Lahul and Spiti.