An activist has questioned the ongoing avi-fauna study at the site of the proposed Navi Mumbai International Airport. The study being conducted by the Bombay Natural History Society (BNHS) has major shortcomings and is not likely to help in mitigating problem of bird hits, endangering the safety of both birds and air travellers, claims Debi Goenka, trustee of the Conservation Action Trust (CAT). While giving conditional clearance to the airport, the Union environment ministry had asked for a baseline survey of avian fauna to be conducted for preventing bird hits. So far, BNHS has submitted three quarterly reports. 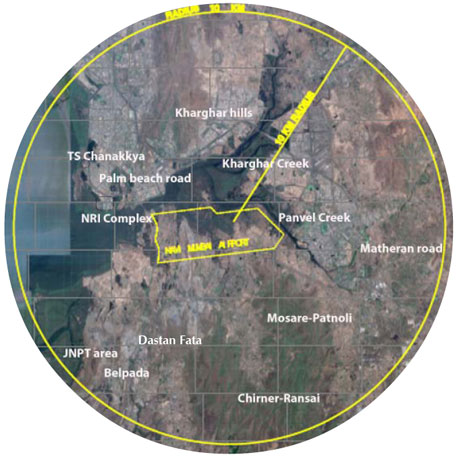 Goenka's claims comes days after the Bombay High Court rejected a request made by the project’s implementing agency, the City and Industrial Development Corporation (CIDCO), to bypass the legal requirement of obtaining a forest clearance and three days before the Maharashtra wildlife board is slated to consider it for the same. Goenka was a party to the high court case.

The study has three major loopholes, according to Goenka. “The BNHS reports do not talk about how the reclamation of 1,000 acres of mudflats and 400 acres of mangroves, accompanied by the destruction of two hills will impact the avi-fauna at the airport site,” says Goenka. Second, BNHS, despite taking GPS readings of the study area, including the Karnala bird sanctuary, has not been able to discover that it is less than 10 km from the airport, and therefore requires clearance from the National Board for Wild Life (NBWL), of which the Director of BNHS is a member, he adds. Third, the BNHS report does not deal with the avi-fauna of the Matheran eco-sensitive zone or that of Elephanta island, “both of which are on the flight path of the proposed airport”, says Goenka.

In March 2012, the Maharashtra forest department had sent a letter to the environment ministry, saying that the proposed airport fell within the 10-km eco-sensitive zone around the bird sanctuary. Goenka had also sent a complaint note to the ministry about it around the same time. Details of two of the quarterly reports which are in public domain show that they contain substantial details about the more than 170 different species at the airport site. However, in the map of the airport showing 10 km radius around the project, there is no mention of the popular bird sanctuary.

Asad Rahmani, principal investigator of the surveys and director of BNHS, refused to comment. A CIDCO official, speaking on the condition of anonymity, says, the annual report that should reach the agency in two months would be more detailed.