Back on menu: bird nest soup 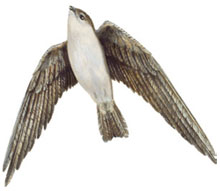 THE Union environment ministry has adopted an unusual conservation strategy to save the dwindling population of edible-nest swiftlets (Aerodramus fuciphagus) in the Andamans. It has taken them off the Schedule-I list of the Wildlife Protection Act, 1972, which accords the highest protection to a species.

The nests of these swiftlets are made of hardened saliva and are taken away by poachers to be sold in the market. In Singapore and Hong Kong, a kilogramme of nests fetch US $3,000 to US $4,000. They are used in fine dining restaurants to make birds' nest soup. The de-listing would allow local people to breed the birds, prized for their edible nests, at home. People would then leave alone the birds living in the wild; this would preserve the species, officials reasoned. The plan was the brainchild of Ravi Sankaran, an ornithologist, who was inspired by a similar experiment in Indonesia (see 'Feather touch conservationist', Down To Earth February 16-28, 2009).

The plan is simple. Transfer the swiftlet eggs to the nests of another species--the glossy swiftlet that is comfortable in human homes. The newborn edible-nest swiftlets will learn from their adoptive parents to live in human habitations. Edible-nest swiftlets always return to their birthplace to nest and so will provide ready-to-harvest nests to the breeders. Till eight years ago, poaching of swiftlet nests was rampant in the Andamans and reduced the bird's population considerably. Poachers used to take away the nests every time they made new ones. This prevented the birds from breeding, said Shirish Manchi of Salim Ali Centre for Ornithology and Natural History (SACON), who worked with Sankaran on conserving edible-nest swiftlets. Poaching reduced considerably when 14 of the poachers were hired as daily wage labourers by the forest department in 2001. Once the communities start breeding swiftlets they can harvest the nests at home, he said.

The de-listing is for three years. SACON, on whose demand the birds have been de-listed, will have to prove during this period the method is successful. "We are working out the details of the programme," said Manchi. The ministry's decision is restricted to the Andamans alone where the birds use their saliva to make nests. The nests of edible-nest swiftlets in Western Ghats are not so edible as they have both feathers and saliva.