Is US roping in India on the sly to subvert Kyoto Protocol? 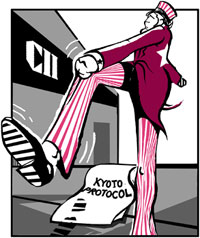 harlan Watson, the high-profile us senior climate change negotiator and special representative, arrived in Delhi on April 29, 2002. On the same day, the Confederation of Indian Industry (cii) began closed-door parleys with the Washington-based think-tank, Atlantic Council. Watson did the rounds of various ministries even as cii got on with its conference, innocuously called the 'Quadripartite Seminar on Clean Air for Asia'. Critics fear that both events were an attempt by the us to undermine the Kyoto Protocol and, at the same time, push for coal and nuclear technology transfers to India. While India has officially committed to ratify the protocol, the us has refused to do so.

Watson called on Union minister for power Suresh Prabhu and secretary, Union ministry of environment and forests (mef), S Jayakrishnan. He also met senior officials from the Union ministries of power, petroleum and natural gas, non-conventional energy sources, and external affairs. Watson's ostensible purpose was to explain the climate change policy announced by us President George Bush on February 14, rejecting the Kyoto Protocol and asking for voluntary cuts by the us industry in greenhouse gas emissions. He explained the us position on global warming.

But the hush-hush nature of the talks leads critics to suspect that Watson's brief was to draw India towards a bilateral climate change agreement, similar to those made with Australia, Canada and Italy. This could jeopardise the Kyoto pact, they fear. Queried on whether Watson had broached the bilateral deal issue, us embassy officials refused to comment.

Already Canadian environment minister David Anderson has announced that his country would rather opt for voluntary energy credit systems than follow the Kyoto regime . Canada will present a formal proposal on clean credits next month at a un meeting in Whistler, British Columbia. The European members of the Group of Eight (g-8), while espousing the use of nuclear energy under the protocol, vehemently oppose the clean-fuel credit plan and are apprehensive that Canada will use such a rebuff as an alibi to avoid ratification of the Kyoto pact (see box: G-8 N-chanted). Another reason why Indian observers feel there's more to it than meets the eye is the failed attempt of usa to talk Thailand into signing a pact in consonance with the us Tropical Forests Conservation Act (see box: The Thai snub). This involved using Thai forests as 'sinks' to sequester carbon dioxide for which the us could claim credit.

The us deal with Australia was inked in February 2002 and is called the us -Australia Climate Action Partnership. It will involve the us Environmental Protection Agency, departments of state, commerce and energy and their Australian counterparts. In a press statement, the us government said the partnership would focus on "practical approaches" towards dealing with climate change. Australian opposition politicians criticised the pact. In fact, senator Bob Brown of the opposition dismissed the partnership as a blatant concession to industry. "David Kemp (the Australian minister for the environment and heritage) has endorsed the Australian coal and us oil industries' opposition to mandated pollution control laws," Brown said in a statement. Similar reactions followed the us' signing a pact with Canada.
It was against the backdrop of these international events that critics in India took exception to the cii seminar in which Atlantic Council -- the Washington-based think-tank that advises the us government on several issues such as energy policies -- participated. They were miffed about the parleys being kept out of the public domain. The seminar discussed transfer of "clean technologies" to India, albeit outside the purview of the clean development mechanism (cdm). cdm allows annexure I countries to take credit for reduction in carbon dioxide emissions by transferring cleaner technologies to developing nations for a price.

A Union government bureaucrat present at the seminar dubbed it as "controversial" and added: "There were surely no taboos -- nuclear technology and coal-based power generation were being openly talked about (as an option to technology transfer to India) to improve the environment."

V Raghuraman, senior advisor on energy to cii, when queried, refused to divulge the details of the meeting. He said, "Why is everyone harping on what went on inside (at the seminar)? It is not relevant; only the overview report made finally should be talked of." Raghuraman was one of the two official rapporteurs for the seminar. "The discussions had nothing to do with Kyoto Protocol or cdm. We only discussed the energy scenario of the country in its entirety. The seminar discussions concentrated on finding an environmentally better path for the sector," he said.

The seminar was co-chaired by us National Mining Association president and vice-chairperson of the think-tank, Richard L Lawson. Its so-called "clean path" and agenda became an open secret upon the release of the position papers of some of the participants. "Renewables are expected to remain a small percentage of commercial energy (in Asia)....Clean coal technologies...are needed," reported one.

Lawson's stand on Kyoto is evident from a statement he made in March 2000 at a us senate committee meeting: "The command and control regime that would be required by the Kyoto Protocol will only be a short-term solution. It would be economically devastating (to the us) and globally ineffective.... Climate or other environmental policy cannot preclude the use or expansion of any source (of power) such as nuclear energy or coal."


cii officials steadfastly refuse to admit the obvious relation between their deliberations and Watson's visit. Though they acknowledge that Watson and chairperson of the Inter-governmental Panel on Climate Change, R K Pachauri, were present at the gathering for a while, this was passed off as merely "coincidental".

Watson, in the meantime, besides meeting government officials during his two-day visit, also talked to the Centre for Science and Environment (cse). Sunita Narain, director of cse, says, "Watson asked us if we were against a bilateral dialogue between the us and India on climate change. cse made it clear that it did not oppose the idea as long as the public was kept fully aware of the details of any such deliberations."

While the joint secretary in charge of climate change in mef remained unaware of the proceedings of the seminar, Union minister for environment and forests T R Baalu tried to allay fears expressed in the Rajya Sabha by stating on April 26 that "India's policy on climate change remains unaltered".

But these recent moves have raised doubts in the minds of many on whether the us is trying to undercut the Kyoto Protocol by engaging in 'bilateral deals' on clean energy and bypassing the multilateral negotiation process. It is no secret that us industry -- while not willing to adhere to legally binding emission cuts mandatory under Kyoto Protocol -- is also keen not to be left out of the lucrative business of selling clean energy technologies. This way the us wants to have its cake and eat it.