Bad for wildlife, bad for people 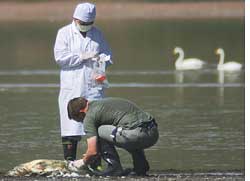 Spread of diseases due to climate change may be preventable

WILDLIFE is closely linked to the ecosystems and a slight disturbance can have a major impact on the health of animals. Changes in temperatures and rainfall due to global warming make animals vulnerable to the diseases they contract or transmit. A report by the Wildlife Conservation Society (wcs), a us -based non-profit, lists 12 such infectious diseases that could spread into new regions as a result of climate change. Given the potential impact of these diseases on global health and economies, the report said monitoring wildlife would help countries mitigate their impact on humans.

Most of the emerging diseases included in the list such as avian influenza, ebola, cholera and tubercu losis, threaten humans and animals equally. These diseases have been monitored, but their response to changes in temperature and rainfall are still unclear. World Health Organization data showed that the occurrence of cholera was directly co related to increases in water temperature. Similarly, ebola and rift valley fever were associated with unusual variations in rainfall and dry seasons. The Inter-governmental Panel on Climate Change report last year warned that increase in coastal water temperature would aggravate the occurrence of cholera in South Asia.

The wcs report, The Deadly Dozen: Wildlife Diseases in the Age of Climate Change, attempts to draw attention to how infectious diseases might spread with the changing climate. The report identified how changes in the climate favoured the spread of disease causing viruses and bacteria. In recent decades, infectious diseases such as malaria, yellow fever, plague had increased either in number or geographic range.

Alterations in host (animals and humans) behaviour brought about by climate change can increase their exposure to pathogens or germs For instance, with water supply under threat on the Patagonian Steppe in South America, interaction between wildlife and livestock at the available water sources will increase, making the livestock more vulnerable, in turn affecting humans. The researchers, thus, argued that monitoring of wildlife health would provide an indicator of climate-related diseases. "Understanding how wildlife responds to climate change will help governments detect and prevent diseases," said William Karesh, vice president and director of wcs's Global Health Programs.