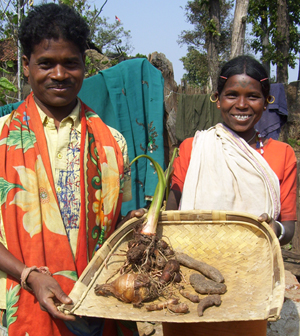 Residents of Ranjra, a Baiga tribal village in Dindori district of Madhya Pradesh, spent many months of 2011 collecting a variety of edible tubers, roots and medicinal plants found in their forest. The idea was to propagate these plants since the village was finally going to get its community forest rights (CFR) papers. “Our forest has lost a lot of its diverse wealth due to the forest department’s policy of saal tree monoculture. We were hoping that since we were getting the management rights, we would work 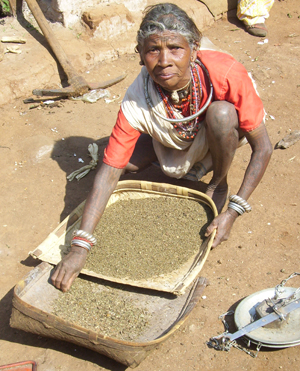 to regenerate the lost forest produce useful to us,” says village resident Hariaro Bai. “But now we do not know what to do,” she says.

When the CFR claim papers finally arrived, the Baigas were speechless with surprise. The land they had been given as community forest was not forestland at all, but the agricultural and residential land of the village, the titles for which they had already received under individual forest rights claims. “We realised this because all the forest compartments given to us are ‘B’ compartments, signifying residential and agricultural land in forest department's terminology,” says Barelal Rathuria, president of the village forest rights committee. “When we examined the claims closely, we found that the compartment numbers were the same as those mentioned in individual claims given under the Forest Rights Act (FRA).”

No forest for tribal villages

One would think that the subject of a community forest rights claim under FRA would be…well, forest. But in the tribal district of Dindori, all except one of the 380 claims that the administration says it has distributed till date do not relate to forestland. They simply bestow all of a village’s agriculture and utility land to it all over again, as common property.

Worse, the authorities are completely unapologetic about this futile exercise, insisting that this is the right way to go about giving CFR rights, that this is what is being done elsewhere, and that villages have not demanded forestland in any case.

However, a visit to several tribal villages in the district, especially in the Baigachak area dominated by Baiga tribals, reveals that district authorities, despite repeated requests, failed to provide villages with relevant documents to file CFR applications, and that villages do want forestland.

Rights not under relevant Act

Dhaba, a Baiga village in Samnapur tehsil, is the only village to have received forestland under CFR in the entire district, but the rights granted to it have not been given under the Forest rights Act 2006. “We have been given two claim papers,” says Sukkal Singh Rathuria, FRA committee president. “One gives 1,827.89 ha to the village joint forest management (JFM) committee for minor forest produce (MFP) collection under the Indian Forest Act 1927, and the other gives 205.27 ha for nistaar purpose (right to collect minor forest produce, including fuelwood, for self-consumption) under the Van Gram Sthapana Niyam 1971.”

“The claim papers make no sense,” says Balwant Rahangdale, forest rights activist from the non-profit National Institute for Women, Youth and Child Development at Dindori, which has helped villages apply for CFR. “Why are claims being given under legislations that have denied people rights over forests for more than a century, when a law for correcting the historical injustice exists? And anyway CFR is a part of FRA, and the manner in which these claims have been granted is not legally valid, says Rahangdale.

“We want a clear-cut CFR claim that gives all rights including management and conservation rights to the gram sabha, in the spirit of the FRA,” says Rathuria, “We do not believe in JFM and we can’t be content with MFP collection and nistaar alone.” The village has appealed against the decision, but has not received any response from the officials till date.

“Why do we need this fresh ‘patta’ for our agriculture and utility land, when we already have pattas for this land ?” asks Bir Singh Sarodia of village Ajgar, putting his finger on a fact that does not appear to have occurred to the officials. “We had applied for right to the forest that our village had been protecting since generations, but what we got is something else altogether.”

Asked for comments, district collector G V Rashmi says there is nothing wrong with the titles. “The land has been given to the people as collective community resource. That is how it is being done everywhere. We did the same in Sehore,” she says. Informed that people had applied for forestland under Section 3(1) of FRA, she made the surprising declaration that people had not demanded forestland at all.

Divisional forest officer (DFO) of Dindori, L P Tiwari, took an even more bewildering stand. “People here don’t need rights like in Mendha Lekha where people were demanding bamboo rights. Here there is no bamboo in the forests.” Asked if this was the reason why forestland had not been given, he denied it. However, he could not give the exact reason for denying the Baigas their community forest rights.

“The administration has taken advantage of people’s ignorance of official procedures in issuing claims,” says Rahangdale. In 2008, 20 villages from the Baigachak area wrote to the tribal development department, asking for their nistaar and other documents with the help of which they could fill their CFR claim forms. But for one whole year the documents were not provided despite repeated reminders. Finally, in February 2009, the people filed claims, using the traditional names of forests, and now administration is saying people did not demand forestland, says Rahangdale.

Barelal of Ranjra confirms this. “We do not know the compartment numbers of the forest area we have been traditionally protecting, so we had asked administration to provide us the information. But we were given nothing, so in the end we had to simply mention the traditional names by which we know our forests.” 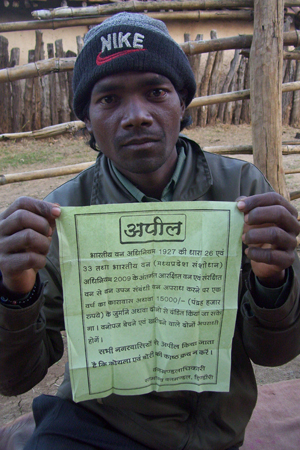 Dhaba village, which had made a more thorough follow-up, is the only exception to this rule, says Rahangdale.

There are other irregularities in the manner in which the claims have been given, informs Rahangdale, “While administration claims that all 380 claims in the district have been cleared, only nine out of the 20 villages in the Baigachak region which applied for CFR have received papers. What is more, the papers have come two full years late, issued in December 2011 when the issuing date is 2009, and only xerox copies of the claims have been given, not the original claim papers.

Assistant commissioner for tribal development, P N Chaturvedi was not available for comment.

Also, inform villagers, immediately after the CFR papers were distributed, a mysterious pamphlet threatening dire consequences of “forest produce-related offences”, and claiming to be issued by the divisional forest officer, was circulated in the villages by forest guards. While officials are silent about whether such a document was circulated by them, villagers feel it was done to intimidate them and discourage them from claiming forest rights, says Sukkal Singh Rathuria. 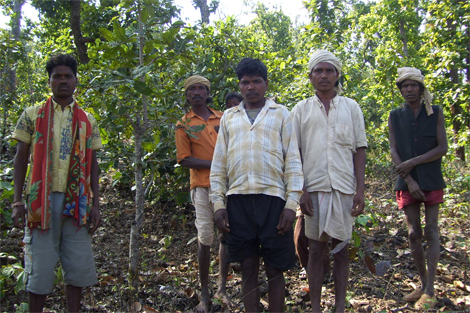 In mid-January this year, barely three weeks after the CFR claims were distributed, the department marked a coupe comprising some 2,000 saal trees in the village forest, but the gram sabha and FRA committee opposed it. Says Fulwati Ningunia, FRA committee member, “the department says that they are going to fell only old saal trees, but we know these trees can live up to 100 years or more.” The village does not want the trees felled because they are all in the seed-bearing age, and saal seeds are an important source of both food and income for them. “It is the most lucrative MFP, because it is available in abundance and sells at Rs 10 per kg,” says Ningunia, “And it also supplies us with food for almost a month every year.”

The village, says Ningunia, has given the administration and forest department five gram sabha resolutions opposing felling but still villagers are being threatened to comply with the working plan. Deputy range forest officer R K Patel and DFO Tiwari insist that the felling is part of the working plan and cannot be stopped. Villagers, however, insist that before any working plan operations, the village’s forest rights claim must be settled in the spirit of the FRA. “We have been threatened with arrests, cancellation of the CFR claim paper given to us and so on, but we will not have our forests destroyed by the department any more,” says Ningunia.