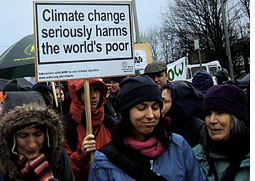 An international coalition, Stop Climate Chaos, rallied its troops in the uk "to save the planet and billions of people on it from the catastrophic destabilisation of global climate". Activists raised their voices on December 8, hoping to be heard halfway across the world in Bali.

A hundred activists marched up Hope Street in Glasgow that wet morning demanding more action from governments on climate change. It was a cold march to dampen the spirits, as even some of the participants were not sure what their stand was. Amid the banners, fake polar bears and papier mache globes, were students, grannies or parents with push chairs wrapped up to face the cold. Christmas shoppers curiously stared at the small crowd chanting "Act before its Too Late" without really understanding what was going on. In fact some of the marchers were themselves not sure what the march was about. Ruth, a student at Edinburgh University, says, "I want our leaders to be sensible in what they choose to do", then asks intrigued "what is happening in Bali?"

In London, the coalition gathered 10,000 people to march from the Houses of Parliament towards the us embassy and demanded concrete action. On bike and on foot, to the sound of Samba drums, marchers used the Bali talks to raise awareness about climate change and insist on strong action. Compared to Glasgow, the crowd seemed better informed thanks to various events organized around the city.

The marchers even went and knocked on Prime Minister Gordon Brown's door in Downing Street, he was given a letter asking for a strong climate change bill in the uk. The final action took place in front of the us Embassy, organizers hoped to thus pressure the us to actively participate in fighting climate change.