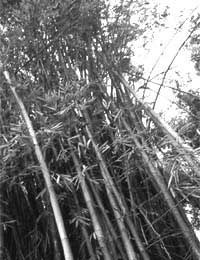 mizoram is leaving no stone unturned to counter the impending disaster resulting from the flowering of bamboo that is set to take place in 2003. With 49 per cent of its geographical area covered by bamboo plants, the hill state cannot afford to ignore the phenomenon and the famine that ensues it. In order to reduce the impact of the famine, the state government has suggested cutting down of bamboo plants. "Bamboo is a fast-growing plant and regenerates rapidly," says Rosiama Vanchhong, conservator of forest, Aizawl. When the famine is over the bamboos would be regenerated, Vanchhong added.

The bamboo plant flowers every 50 years in Mizoram. During this period, the plant produces a huge amount of protein-rich seeds, which attract rats that multiply rapidly. Once the seeds are depleted, the rodents attack the rice, potatoes and other standing crops, eventually leading to a famine. This phenomenon is typical to Mizoram because of its high concentration of bamboo plants. But bamboo experts suggest that there are better solutions to the problem such as the introduction of non-flowering varieties. According to H Y Mohan Ram a botanist from the Delhi University, introduction of crops like ginger and turmeric that are not eaten by rats, can help solve the problem to a great extent without cutting down the tress.

The state government is also planning to exploit the economic potential of the bamboo plants that will be cut down. For this purpose, forest officials were sent to China for training in bamboo management with assistance from the Beijing-based International Network for Bamboo. The Planning Commission has sanctioned Rs 4 crore for the establishment of a bamboo-processing unit and the machine will be imported from Taiwan. "The potential of the bamboo plant is enormous and it is an ideal raw material for an earthquake-prone areas like Mizoram," says Zoramthanga, the chief minister of Mizoram. The Union government is also formulating a bamboo policy for Mizoram, the first of its kind in the country, which would include a working plan that covers issues like harvesting bamboos.