Bandh in Kerala against Kasturirangan panel report on Western Ghats

Kerala observed a day-long, state-wide bandh on Monday against the Centre’s decision to implement recommendations of the Kasturiangan Committee on conservation of the Western Ghats. The bandh was called by CPI(M)- led Left Democratic Front (LDF), the opposition party in the state. LDF alleges that the Centre's decision is unilateral and would affect people living in the upland areas.

On November 13, the Union Ministry of Environment and Forests (MoEF) directed six states, including Kerala, spanning the Western Ghats, to ban environment-damaging activities in villages identified as ecologically-sensitive areas by the Kasturiangan Committee. These environment-damaging activities include mining, quarrying, construction of thermal plants and red-category (highly-polluting) industries and construction of buildings spread over more than 2,000 sq metre and townships spanning more than 50 hectares. In Kerala, the committee has identified 123 villages across 12 of the 14 districts as eco-sensitive areas. Most of these villages are thickly populated. This is the reason for widespread apprehensions among people that implementation of the Kasturiangan Committee recommendations will lead to displacement of hundreds of families from these villages.

Resentment turned into violence on November 15 in Kannur and Kozhikode districts, where protesters stoned government vehicles and Kerala State Road Transport Corporation buses and set fire to a forest office at Vilangad in Kozhikode. In Thamarassery, an angry mob gheraoed the district superintendent of police (SP) and deputy SP and set ablaze a police jeep. They also attacked the vehicles of some Malayalam TV channels and damaged the cameras. Several people and 20 police persons were injured during the clash. The police fired bullets into the air to disperse the mob and have registered cases. 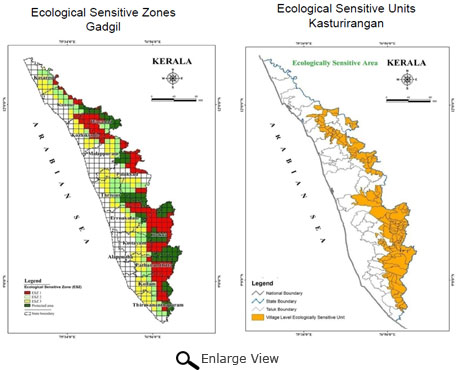 The following day, LDF called hartal in Idukki and Wayanad districts. More than 60 eco-sensitive villages fall in these districts. The Left is going ahead with agitations despite assurances from Chief Minister Oommen Chandy that nobody will be evicted from upland areas.  “There is no room to panic over the issue since the Central government’s notification would apply only on ecologically dangerous activities like mining and quarrying in the ecologically sensitive areas,” the chief minister had said on November 15, following the violence in Kozhikode. “I assure the people of the state that not a single person will have to move out,” he said.

The chief minister had also appealed the Left not to spread unnecessary fears and withdraw the agitations, saying that the Union minister of state for environment and forests, Jayanthi Natarajan, had assured that the Centre would consider the concerns raised by all the states.

Earlier on October 21, LDF had boycotted the all-party meeting convened by the chief minister to discuss how the Kasturirangan Committee report would affect the state. The Kerala government had appointed a three-member committee to study the impact of the report.

“The committee is studying the recommendations of the report and the state will inform the Centre if there is anything that would adversely impact the people,” said the chief minister.

Apart from LDF, a few partners of the ruling Congress-led United Democratic Front (UDF), such as the Kerala Congress (M), are opposing the implementation of Kasturirangan Committee report.

A section of the church in the state is backing the agitations. The Catholic Church is strongly opposing the report, saying it is anti-farmers and, if implemented, it would affect the livelihood of farmers. It also says that many farmers who have settled in the high ranges are yet to get title deeds and implementation of the report will affect title deeds.

Pastoral letters issued by the Catholic bishops in Idukki district and Thamaraseery in Kozhikode district warn of serious consequences if the government went ahead with “unilateral” implementation. The letter issued by Bishop Mar Remigios Inchananiyil demands withdrawal of the decision to implement the report. It states that as part of intensifying the protests, rallies and dharnas would be organised under the aegis of the Pashchimaghatta Jana Samrakshana Samithi (Western Ghats People Protection Committee) on November 21.

The High Ranges Protection Council in Idukki is observing a 48-hour “living on the street” agitation, which will end on the night of November 19. “We will not pay taxes, electricity and phone bills and will block all government offices in the coming days if the Centre moves ahead with its decision to implement conservation of the Western Ghats without consulting the people who would be affected,” says Sebastian Kochupurackal , catholic priest and chairperson of the High Ranges Protection Council.

While the Catholich Church supports LDF’s agitation, the Church of South India (CSI) has called for the implementation of stringent laws for the protection of the Western Ghats in a manner that would not affect the small-scale settler farmers. According to a statement issued in Kottayam by Thomas K Oommen, CSI Madhya Kerala Diocesan Bishop, on November 16, the political controversy over the report results from lack of understanding of the essence of the reports of the Kasturirangan committee as well as the Western Ghats Ecology Expert Panel (WGEEP) led by Madhav Gadgil, the first committee appointed by the Centre to make recommendations for conserving the Western Ghats. (see 'Experts' panel red flags power, mining projects in Western Ghats'). The church denounced unnecessary agitations including hartal over the issue, the statement read.

Interestingly, the political parties and the section of church which oppose the “unilateral implementation” of conservation of the Western Ghats, have neither translated the Madhav Gadgil Committee report nor the Kasturirangan committee report into Malayalam, the state’s language. “People are in the dark about recommendations made in the reports,” says noted environmentalist C R Neelakandan. “The political parties as well as a section of the church are trying to catch fish in the troubled waters by misleading them and making them scared,” says he. “In fact, those who mislead people and trigger protests and violence have vested interests and backing the mining and real estate lobbies,” says A Jayasankar, lawyer and environmental activist belonging to the Communist Party of India (CPI). The CPI(I), a partner of the LDF, is supporting the protest.

Adivasi and dalit organisations in Kerala have also strongly opposed the agitations. “Unlike mining and quarrying in other states, large-scale influx of people into the upland areas from other parts of the state has destroyed the Western Ghats in Kerala,” says Sunny Kapikad, a dalit leader. This has also affected the lives of adivasis and dalits, who have traditionally been living in the high range areas. “But the state government, whether it is led by the UDF or LDF, is unable to do anything against the settlers because they are a strong political lobby,” he points out. According to Kapikad, the Left does not have a strong base among the settled farmers.

“Now that the general elections are round the corner, the Left is trying to penetrate into this vote bank of UDF,” he alleges. Many of the newspapers and channels in the state highlight the agitations while they fail to voice the concerns of adivasis and the dalit communities who want conservation of the Western Ghats. Kapikad says adivasi-dalit communities want the government to implement the Gadgil report, which has made more stringent recommendations to conserve the Western Ghats. “The recommendations of the Kasturirangan Committee report are diluted ones,” he says.