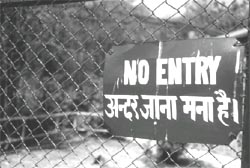 there is no hope of protecting species from extinction by fencing off 'biodiversity hot spots', warns a new report. These areas of high biodiversity are home to up to one billion of the world's poorest people, who desperately need the land for farming and there is no hope of our conserving biodiversity that way, says Jeff McNeely, chief scientist at the World Conservation Union ( iucn ) and co-author of the report.

The report, released in London this week with the support of Future Harvest, an organisation representing 16 international agricultural research centres, is based on the 'hot spots' approach of Norman Myers, a uk -based ecologist. Myers had claimed in the journal Nature that preserving just 25 areas around the world that have the highest biodiversity would go far to stem the mass extinction of species. The areas, Myers had pointed out, contain half the world's species, but together cover an area smaller than Greenland. But, the iucn report says more than a billion people, one-sixth of the world's population, live in these 25 hot spots. And these people are often among the most impoverished in their respective countries.

Endangered species, essential farmlands and desperately poor humans often occupy the same ground. It is unrealistic to expect isolated protected areas to carry the full responsibility for conserving wild biodiversity. Rather, combining conservation and farming efforts, dubbed as 'eco-agriculture' could work better just as it has in Costa Rica, where efforts include planting windbreaks to connect patches of forest, and growing trees on pasturelands to protect forest birds and shade coffee plantations.

The report mentions how in many cases, bringing nature back to the fields has boosted productivity by attracting pollinators, improving soils and providing new crops such as fruit, medicinal plants and fodder.

It also mentions that the development of eco-agricultural systems is often discouraged by the research funded by the private sector, which wants to make money by concentrating on the most productive land.