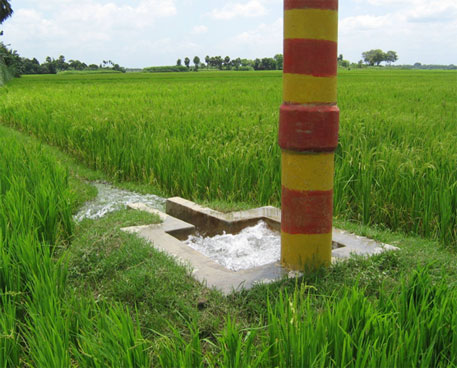 The Barind region of Bangladesh was once the driest part of Rajshahi division, one of the seven administrative divisions of the country. Farmers in the region found it hard to grow even one crop. But it now produces three crops a year. The turnaround has happened because of the unique irrigation system developed for the region. It comprises a network of underground pipelines developed by the Barind Multipurpose Development Authority (BMDA), an independent autonomous body established in 1985 under Bangladesh's ministry of agriculture for developing agriculture in the region.

There are about 40-45 rivers in the Barind region, but most of them dry up during the lean season. Absence of surface water meant that people in Barind relied heavily on groundwater and were able to grow only one crop during the monsoon season. For the rest of the months, the whole area used to face severe drought. Mud cracks in farms ran as deep as 15 metres.

Until the formation of BMDA this region was mainly irrigated through shallow tube wells. A few private deep tube wells were available but buying water from these was very expensive for the farmers. It used to cost 3,000 to 3,500 taka (approx. INR 2,400 to 2,800) to irrigate one bigha (approximately 0.13 hectare), says Mohammad Abdul Kasem, superintending engineer and project director with BMDA. 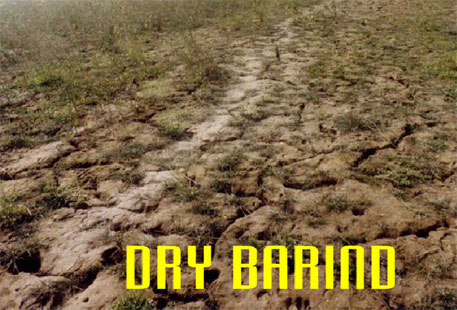 “The situation was extremely bad for agriculture. Earlier we use to collect water from pukuis (small ponds), which was available for free but we could grow only one crop in whole year,” says Monirul Islam a farmer from village Ramnagar of Godagari upzilla.

Before 1985, the potential for the agricultural development in Barind was considered nil and area was considered not suitable for development. Today, agriculture is the main occupation in the region and 81 per cent of people in Barind are farmers, all thanks to BMDA's financially self-sustaining underground pipe irrigation system.

Water for irrigation is sourced from deep tub wells and distributed through underground PVC pipe system to individual fields. It was not just technical innovation. It gives access to water to all the farmers to irrigate their fields. “The system provides access to water throughout the year and minimises water wastage,” says Kasem.

How the irrigation system works

The system operates in two ways: through a coupon system and through prepaid meters. The tube wells are operated on hourly basis. Farmers buy coupons from the BMDA office or dealers appointed by BMDA who get a commission of five per cent from BMDA. There is an operator for each pump station. When a farmer wants water in his field, he contacts the pump station and places his demand before the operator. The operator then opens the valve connecting to the field and switches on the motor for the requested time. The operator collects the correct number of coupons of calculated values from the farmer. 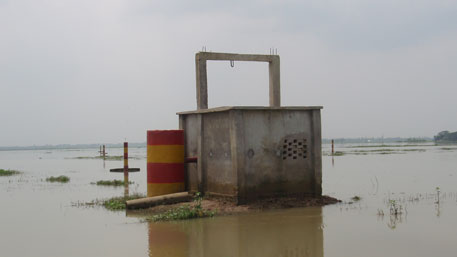 In the prepaid metering system, every farmer gets a user card which is embedded with his photo, name and a user number, provided by BMDA. The farmer is able to top up his user card with an amount of his choice from the local BMDA office or from a dealer. When a farmer needs to irrigate his field, he goes to the respective pump house and inserts his card in the meter slot and selects the amount of water required. The meter starts automatically and the money is deducted from the card. Compared to the old irrigation system, it takes only 600 to 800 taka (INR 480 to INR 640) to irrigate one bigha of land, much lower than what private tube well owners used to charge.

The whole system is well-monitored. After each day or two, BMDA officials collect the coupons from the operators or check the prepaid meters to take the information of pump usage. To cross check the usage hours, electricity meter readings are also registered.

The money earned by BMDA is used to maintain existing pumps and to expand the system to other areas. The Commercial Auditor General (CAG) audits BMDA every year. As per CAG auditing, BMDA is earning surplus amount to operate the whole irrigation system. Kasem who completed his doctorate research on the project—Economics of Prepaid Irrigation System-BMDA Perspective—says BMDA irrigation system is self sustaining. BMDA has not taken any money from the ministry of agriculture to maintain and expand their irrigation system further, says Kasem. At present, there are 14,000 deep tube wells under BMDA covering 600,000 hectares of Barind tract; 450,000 hectares remains to be covered under this initiative of BMDA.

What about groundwater depletion?

The system has benefited about 1.5 million farmers. However, the extraction of water from deep tube wells is a concern among the farmers and the research community. “We understand that it is a limited resource and we are concerned about it.  It would be better if the government could supply surface water rather than groundwater, says Monirul Islam.

Pro vice-chancellor of Rajshahi University at Rajshahi city,  Chowdhury Sarwar Jahan, who is exploring the potential of ground water recharge in the Barind region, also has similar concerns. “Being a country of 140 million inhabitants, agriculture is extremely important for food security of the country, however, there is a serious need to conduct a comprehensive study on the future implications of the system on the condition of aquifers, especially if you are extracting water from deep tubewells.” The BMDA is also aware of these concerns and has already started supplying some surface water from Padma river to the farmers, using the same distribution system, says Kasem.