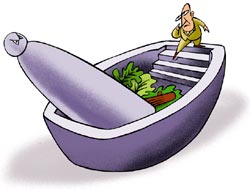 as part of its initiative to promote traditional systems of medicine, the World Health Organization (who) has recently set forth a set of guidelines to help member states evolve regulations aimed at providing consumers with information on the appropriate use of the remedies.

Currently, 80 per cent of the world population uses traditional medicines. As per a who survey of 142 countries, in 99 nations the products can be bought without a prescription. Such "laxity" has led to several cases of side-effects, affecting the foothold of many of the drugs. For instance, on April 12, 2004, the us banned dietary supplements containing the Chinese herb Ephedra, as it increases the risk of heart attacks for some people.

The guidelines can play a key role in informing the masses about such consequences. They are an outcome of who's traditional medicine strategy: 2002-2005. The premier health organisation gathered "evidences" and "experiences" from 102 countries and held a consultative meeting in Italy during December 2003 to review the strategy.

It mainly advocates that steps should be taken to inform consumers about the efficacy, safety as well as contraindication of the drugs, ensure that practitioners are appropriately qualified and registered, and the consumers are provided with easy accessibility to 'channels' where the adverse reactions can be reported.

Based on these proposals, the member states have to now formulate their rules. Radio and television programmes, school curriculum, websites and workshops have been identified as the key tools to inform the masses.

The guidelines, if accepted by the developed nations, may have trade implications, especially for China and India -- the key exporters of herbal products. The world market for the medicines is worth us $62 billion, with Europe and North America accounting for 63 per cent of the world consumption.

The European Union has recently formulated directives that may restrict the import of traditional medicinal products unless their safety is established through clinical trials or monitored use of 30 years. Such stringent regulations are bound to hit the developing countries hard. "It is essential that the who guidelines are strengthened to become binding on the western nations, eventually overriding the European laws. This...is possible if the developing world throws its weight," asserts Josef Hasslberger of La Leva di Archimede, an Italy-based association.

But expecting developing countries to play a proactive role seems to be a far-fetched idea. "Our present regulations are sufficient, making the guidelines unnecessary," asserts D C Katoch, deputy advisor (ayurveda), department of Indian systems of medicine and homoeopathy, Union ministry of health and family welfare. India's drug and cosmetic act of 1940 has provisions related to the licensing and quality of the medicines. Licence can be issued "only if the product is safe...". The act also stipulates that sufficient information about aspects like dosage and side-effects is provided on the product packaging. The Drug Controller General of India (dcgi) is to ensure that the products are of acceptable quality.

The process seems to be satisfactory. But experts avow that it is a mere paper tiger. "The implementation is far from effective," admits S Kumar, vice president of projects, research and development, bacfo Pharmaceuticals (India), New Delhi. "Around 40-50 cases of adverse effects are reported per year from across the country. The problem is much widespread, as this is rudimentary reporting," reveals Urmila Thatte of the department of clinical pharmacology of Mumbai's Nair Hospital -- one of the few organisations keeping records of countrywide adverse impacts.

The chief problem in India is an unorganised market -- there are 8,405 licensed pharmacies, but lakhs of vaidyas (traditional doctors) who do not come under the purview of the dcgi. This puts 80 per cent of the population using herbal products at risk. "Even companies do not provide information on the adverse effects, as it impacts their sales," says Akhilesh Sharma, chairperson of the New Delhi-based Global Society for Promotion of Ayurveda.

As per the experts, the only way out is consumer awareness. "Public pressure can only force the officials to regulate the industry," asserts Sharma. "A quality certification system should be introduced for the masses to make an informed choice," opines Kumar. Hopefully, the officials would take the requisite actions and also give due consideration to the who guidelines.