Bat out of hell

The deadly Ebola virus has a reservoir in fruit bats 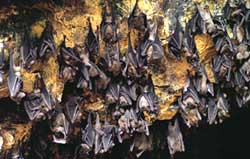 an insight has been gained into what could be a reservoir for the Ebola virus, which causes a severe form of hemorrhagic fever. Researchers have identified three species of fruit bats as likely reservoirs for the virus, where it can exist asymptomatically.

A study conducted by scientists from Gabon, South Africa, France and Thailand was published in the December 1, 2005, issue of the journal Nature (Vol 438, No 7068).

The virus originally infected monkeys, but with deforestation, it jumped species and has now started infecting humans. The first reported case of Ebola was in 1976 in Sudan. Between 1976 and 2004, the African continent had recorded 1,287 Ebola deaths. Between 2001 and 2003, there were five human Ebola outbreaks in Gabon and the Republic of Congo, and around 313 cases and 264 deaths have been reported from these areas, respectively.

The group collected more than a thousand small vertebrates, like bats and birds, amongst others, from around the carcasses of chimpanzees and gorillas that had died of Ebola. Tests showed three species of bats had immunoglobulin g, which are specific to the Ebola virus. But the virus itself could not be separated from the bats, due to low viral load.

These bat species are often found in geographical areas where Ebola epidemics are known to occur. The group found that more apes got infected during the dry season -- scarcity of fruits in the forest led to increased contact between animals as they competed for little food.

Authors suggest the need to understand the behavioural ecology of the bat species to protect chimpanzees and apes from the infection. Local tribes that consume these bats also need to be informed about the risks of contracting the virus.

Ebola is one of the most contagious viruses known to humans and kills anywhere between 50-90 per cent of its victims through massive internal bleeding. There is no cure for the disease.