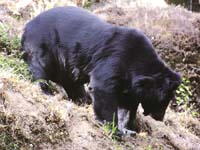 on november 17, 2006, villagers in Mandoora village in Jammu and Kashmir's Tral district locked up a bear which had ventured into the village. The next day the animal tried to break free but the villagers chased and roasted it alive. The incident created a stir when a private news channel telecast its footage.

The November 17 incident was not a solitary one. In 2006, 10 bear were killed in Tral area alone. Mohammad Akbar, a resident of Mandoora village says, "We have no choice other than combating the marauding animals". The wildlife department has never compensated people for their losses which is mandatory as per laws of the Jammu and Kashmir Wildlife Protection Act, 2002. Officials of the wildlife department are aware of the laws but say that there is no notification from the government. They also plead lack of funds.

Mir Mansoor, chief wildlife biologist with the state's department of wildlife protection, also points to another fact "Security camps within the forest hinder free movement of the wild animals. The animals used by the forces, dogs, horses are becoming sitting ducks to these wild animals, curbing their natural instinct to pray."