Civic authorities like to demolish slums. And, as NIDHI JAMWAL finds in the case of Delhi's Yamuna Pushta, such moves invariably also flout all statutory norms 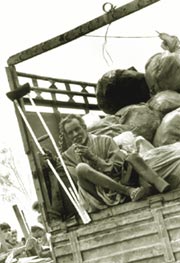 In Delhi, a drive to clear slums from the Yamuna riverfront is under way -- as apparently per Delhi High Court (hc) orders and with the approval of the Election Commission. The Municipal Corporation of Delhi (mcd) and the Delhi Development Authority (dda) have together begun 'voluntary evictions' from the city's largest slum concentration, Yamuna Pushta. The authorities promise that the drive will ensure a clean and green riverfront. As a beginning, the ito-Vijayghat stretch is being cleared for a beautification scheme that Union minister of tourism and culture, Jagmohan's brochure calls My Plan - Your Choice.

But these schemes are devoid of any basis in law. Solutions to slums in the riverbed require implementation of mandatory provisions of the Master Plan for Delhi (mpd)-2001. This Delhi's civic authorities have conveniently forgotten. Says Gita Dewan Verma, a Delhi-based planner, "The Pushta clearance is a horrendous distortion of reality: laws are being flouted in the name of court orders, voting rights are being infringed in the name of the Election Commission and the government is carrying out a war-like operation against its own citizens for pursuits that will further aggravate Delhi's problems." Verma and some other activists have been documenting the drive and are making representations, both to the Centre and the Delhi government, for slum clearance and riverbed development according to the mpd.
There are no official figures about the total population of Yamuna Pushta, but an estimated 75,000 families live in this series of slums that flank both sides of the river. Most of them are along the west bank along New Delhi, Old Delhi and Civil Lines. The three-kilometre stretch (see map: Bulldozed off) in this concentration being cleared for the minister's scheme has (or rather, had) well over 20,000 families. In this stretch there are/were slum clusters, such as Gautampuri, Koyla Plot, Kanchanpuri and Indra Colony. At the receiving end of the drive are also settlements comprising families involved in riverbed cultivation for generations.

The government derives sanction for the demolition from a hc order dated 3 March 2003 to "Forthwith remove all unauthorised structures, jhuggies, places of worship and or any other structure unauthorisedly put up in the Yamuna bed and its embankment, within two months." Though 'all' encroachments had to be removed, the government only targeted jhuggies (shanties). Today buildings owned by religious, private, government and non-government organisations stand rudely amidst the debris. Also thriving firm in the riverbed, are massive projects that violate the mpd. Among them are the Metro Railways Depot -- with a police station and an up-coming information technology park -- at Shastri Park and the Akshardham Temple, with an up-coming Commonwealth Games Village next to it. Besides taking up more riverbed area than slums, these equally illegal structures draw more groundwater from the Yamuna floodplains -- reserved by the Central Ground Water Authority (cgwa) for protection of aquifers for drinking purposes and domestic uses. When contacted by Down To Earth, Saleem Romani, cgwa member secretary, refused to comment on this violation.

Alleges Verma, "In the name of the court order, heat has been created around the Pushta slums to obfuscate the techno-legal definition of encroachments. And this has been done to protect and abet profitable illegal construction." After the hc order was reported in media, she wrote to the Union and Delhi governments suggesting priorities for encroachment removal, based on the extent of intrusion and the groundwater damage it caused. No action was taken on this. Indeed, the court order also lay in abeyance till 11 December 2003. At this time, the Union tourism minister shot off a letter to the Union minister of urban development about "a big project, which synthesises elements of tourism, culture, history, heritage, clean civic life and environment". The project was being held up by delays in clearing jhuggies, the letter stated. Subsequently, at a high level meeting on 3 January 2004, the tourism minister "Drew attention of the participants to the fact that about 19,000 plots were available for resettlement of eligible squatters and yet the orders of Delhi High Court regarding clearance of Yamuna River Front were not being implemented". At this meeting, "It was unanimously decided that, for the first phase, 5,000 plots should be earmarked and clearance and resettlement should begin". Accordingly, Gautampuri 2 was demolished on 13 February 2004. After a month's gap, mcd cleared the rest of ito-Rajghat Pushta in a fortnight: Gautampuri 1 and Koyla plot on 17 March, the slum near Power House on 19 March, Kanchanpuri on 24 March and Indra Colony on 1 April. On 7 April, bulldozers were pressed into service in Vijayghat Pushta and half the area was cleared within a week.


The solution to the Yamuna Pushta problem is two-fold. Says Verma, "Protecting and developing the riverbed requires a zonal plan which accords due regard to the city-wide significance of the Pushta and also protects the needs of its slum-dwellers." In fact this has been recognised by the mpd. It views the riverbed as an ecological, cultural and spatial resource and has designated it as a special significance project area with the status of a zone. Under the Delhi Development Act, this requires preparing a zonal plan, based upon detailed studies. But this has not been done. Says Madukar Gupta, vice-chairperson, dda, " I don't have any idea of a zonal plan for the Pushta." While there is no zonal plan , ad-hoc schemes and projects have been thrust upon the Pushta and its residents. The Centre, the Delhi government and the mcd have all participated in this ad-hoc-ism with impunity.

Delhi's civic authorities have also ignored another provision of the mpd: providing housing plots to 4 lakh people of economically weaker sections (ews)." What is being termed encroachment in the Pushta is really a result of such inaction," says Poonam Prakash, senior lecturer at the School of Planning and Architecture (spa), New Delhi. Adds Amjad Hassan of Mahanagar Asanghatith Mazdoor Union, "Those evicted will move to far worse slums."


The government claims to have resettled the Pushta evictees in 19,000 plots all over the city. One such resettlement colony is Holambi Kalan in north-west Delhi, where the government claims to have resettled residents of Gautampuri 2. But a citizens' fact finding group found out that plot sizes and layouts and physical, social, economic and transportation infrastructure of Holambi Kalan are way short of mpd requirements.

In fact, trying to settle all slum families in 19,000 available resettlement plots have thrown up a host of illegalities. The mpd specifies that those belonging to ews category should be given 25 square metre (sq m) plots. But most Pushta evictees have received only 12.5 sq m plots, though a few have also received 18 sq m plots. And quite outrageously, the mcd has been charging Rs 7,000 from the evictees for both the plot sizes!

Moreover, many have been totally left out of this resettlement process. Says Aakriti Choudhury, "In Gautampuri 1, the list of residents is based on a four-year old survey that noted 'locked-house' if occupants were at work or were away for some other reason. Such people were not considered for resettlement." Choudhury was a member of a spa team which surveyed Gautampuri after it was demolished on March 17. Sreyoshi Chakraborty, another member of this survey, notes that some Pushta residents have not got plots even after having paid for them. If this was not enough, authorities have not provided housing to the evictees in-lieu of a down payment of Rs 500, despite a hc order stipulating so. Even an undertaking given to the hc for providing school buses to children was not honoured.

All these violations were brought to Supreme Court's (sc) notice in a Special Leave Petition (slp) filed on 15 March. But the sc declined to interfere. "Had it taken up the case, the court could have asked for the numerous illegalities to be accounted for and rectified," laments advocate S Muralidhar.


In the stretch of Pushta being cleared, there are settlements of people who have been involved in riverbed farming for generations. Though they cannot be called encroachers in any sense of the term, their colonies such as Dholakpala, Moolchand, Tejpal ki Bagichi and Belagaon, have also been bulldozed. Says Badri Prasad, pradhan (head) of Moolchand 1, "I have documents dating back to 1917. We paid regular taxes to Britishers. Now the government claims that we have encroached up on 'its' land." He showed about 500 documents to the Down To Earth correspondent to make his point. Narrates Prasad, "In 1996, the dda took some land from us and told us that it would be used to plant trees. Instead, jhuggies were allowed come up on it. It is we who continue to protect this land, our land."

When the demolition drive started, the riverbed cultivators were informed that only slums would be removed. But on 9 April, bulldozers razed down houses in Tejpal ki Bagichi. "Three generations of my family have lived here and I have substantial landholdings. But our houses were destroyed without any notice," says Ram Sai, a 65-year old farmer. "There are standing crops on my fields, how can I leave them and go? And why should I leave my land after all?" "We have huge joint families and also buffaloes. Who will live in a 12.5 sq m plot -- us or our buffaloes?" asks Harphool Singh of Belagaon.

"To label riverbed cultivators encroachers is preposterous since theirs is the most legitimate land-use in the riverbed according to the mpd and the cgwa. If anything, there is a strong case for restoring the riverbed to such cultivation after encroachment clearance," says Verma, who has also written to the authorities in this regard. But is anyone listening?

With inputs from Vikas Parashar