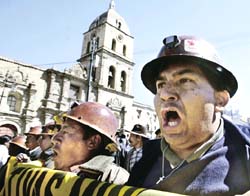 Bolivia, ridden with energy crisis-driven political turmoil, is currently witnessing a period of calm. Protests by peasants, miners and labour organisations, which forced president Carlos Mesa to resign after the Congress passed a controversial energy bill, were halted on June 11, 2005. The bill imposed on foreign oil companies a 32 per cent production tax, in addition to the existing 18 per cent royalty. Mesa had opposed it initially, allegedly under pressure from oil companies (see Down To Earth, 'Twist in the tale', June 15, 2005).