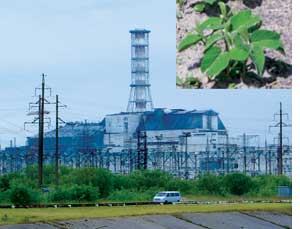 It's a protein that can protect plants from nuclear radiation

twenty two years ago, an accident at a nuclear power plant in Chernobyl, Ukraine, led to 56 direct casualties. According to the World Health Organization, among the 600,000 people most highly exposed, 4,000 died of cancer. A media report put the severity of radiation, 10 minutes after the accident, at 200 times that of natural radiations in Washington. Somehow, most of the plants in the area survived it all.

Humans and plants have a protein--betaine aldehyde oxidase--that protects from radiation damage. Yet in humans, neither is it secreted in large amounts nor is there a mechanism to activate it at the right time. A team found that soybean plant seeds exposed to radiation produced one-third more of the protective protein than under normal conditions.

A chemical analysis of the seeds showed those from contaminated soils were smaller and had slower water intake. Two proteins associated with seed maturation--PM32 and 35 kDa--were more abundant in them.

Martin Hajduch and colleagues from the Commenius University in Slovakia and National Academy of Sciences in Ukraine, who carried out the study, said the plants survived the radiation by activating their seed storage proteins and creating their own defence against the radiation.

This study, published in the June 5 issue of ACS Journal of Proteome Research, might hold clues for finding ways to prevent adverse effects of radiation in humans. Twenty-two years later, the radiation level is still so severe that a 25 km area remains sealed and can only be entered wearing protective equipment. An enormous steel arch is being built in sections around the contaminated area to contain the radiation.