Agreements in the power sector are expected to be pushed to the forefront of Nepal prime minister Baburam Bhattarai’s four-day visit to India that begins in New Delhi today. The bilateral talks are expected to throw up a wide gamut of issues, ranging from closer economic, energy and security ties to a wider development cooperation. 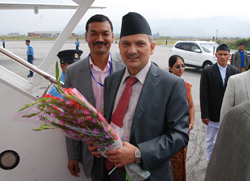 Bhattarai is Nepal’s fifth prime minister in as many years, and the second UCPN (Maoist) leader to hold the post after Pushpa Kamal Dahal Prachanda.

Despite its much-touted 43,000 MW hydroelectric potential, Nepal’s total installed capacity, almost all of it based on run-of-river hydropower projects, is a measly 700 MW. To help meet its peak demand shortfall, Nepal imported about 19 per cent of its electricity from India in the last fiscal year alone.

The country’s crippling electricity shortage has made 18-hour blackouts routine in the dry season, caused by stalled hydropower projects, a restive Maoist cadre suspicious of foreign investments in the power sector, and a near bankrupt electricity utility that faced a cumulative loss of Nepali rupees (NRS) 28 billion by 2010-11.

Nepal simply does not have the money to invest in its power sector. Likewise, private investments in the hydropower sector have dried up in the face of an unsteady regulatory regime and a volatile political situation.

Recently, a high-profile conclave jointly organized by the government, the Nepal Energy Investors Forum and the Asian Development Bank (ADB) to woo foreign investment in hydropower, tried to allay investors’ fears. The meet highlighted recent policy initiatives and showcased a slew of hydropower projects available in Nepal for private sector investment. Although several European, South Korean, Chinese, Thai and Canadian power developers turned up for the meeting, and although ADB pledged to pump in more aid into the energy sector, they all faced a stark reality: cash-rich power developers from India and power hungry India offered the most viable market.

Ensuring the safety of overseas investments has emerged as a core area of concern, especially since the attack a few months ago by suspected Maoist cadres on the premises of the GMR-led consortium developing the 900 MW Upper Karnali hydropower project. A few months back, the government had even declared an energy emergency, that controversially allowed the army to open fire to quell rioting in and around hydro project sites. This explains the push by India for Nepal to sign the Bilateral Investment Protection and Promotion Agreement to secure Indian investments in Nepal.

With the ‘dry’ season just around the corner, Nepal will be looking to import at least 200 MW electricity from India to stave off crippling power cuts. Bhattarai is expected to request India’s help in financing the 400 KVA Gorakhpur-New Butwal cross border transmission line to transmit power from India to Nepal. Another 400 KVA cross-border transmission line, from Muzaffarpur to Dhalkebar, is already underway.

So far, there is no umbrella power trading agreement to facilitate the trade in electricity between the two countries. There was a feeble attempt at a comprehensive power trade treaty in 1996, which however was not ratified by the Nepal parliament. In the interim, electricity imports to Nepal are guided by feeble power exchange agreements, while the terms of electricity trade for hydropower projects being built by Indian money are guided by project-specific commercial contracts.

“Nepal has no power to export,” says Ratna Sansar Shrestha, water and energy policy expert from Nepal who closely follows Nepal’s energy policies. “In any case, asking for such a treaty is a joke, as it is really about allowing the import of expensive power to Nepal,” he points out. Shrestha has crunched the numbers. He says Nepal imports electricity from India at an average rate of Indian Rs 6.70 per unit, while the project agreements signed allow the sale of Nepali electricity to India for as little as NRS 2 per unit. About 3,700 MW of new hydropower projects in Nepal are either under construction or are about to commence construction are dedicated solely for power export to India, and the unequal import-export power tariffs are a sore point among many water and energy policy experts.

Independent power producers (IPPs) wield some clout as they contribute about a third of the served electricity in Nepal. Present policies make it challenging to create a business-friendly environment for private sector investment in the hydropower sector, points out Pradeep Gangol of the Independent Power Producers Association of Nepal. Although the government recently revised the power purchase agreement rates from NRS Rs 4.45 per unit to NRS Rs 5.50, this came after many years, and is still too low for private developers to turn a profit, Gangol says. Then there are inordinate delays in granting hydropower project development agreements for new hydropower sites, while frequent changes in governments result in shifting energy and tariff policies.

Recently, the previous government summarily cancelled the survey licenses of all hydropower projects above 10 MW. Instead, it introduced a system of competitive global bidding for new projects, putting paid to years of effort and investments by many private hydropower developers.

It is difficult to find financiers to back hydropower projects amid such shifting policies, says Gangol. “Today, there are close to 28 hydropower projects, or about 100 MW installed capacity ready to commence construction, but no banks are willing to finance them,” he says.

“We want a comprehensive power trade agreement that will give Nepali electricity producers access to the Indian power market,” says Gangol. “This agreement will allow us to continue to import electricity for the next four to five years, or until our own projects come on stream.”

Besides help for its power sector, Nepal will also be looking to India for a wide range of development aid. Indian assistance already accounts for 40 per cent of Nepal’s total foreign investment. The country’s chief secretary recently handed over a long wish list to Indian embassy officials in Kathmandu.

The list includes assistance on infrastructure projects, including constructing bridges in the Terai, constructing a petroleum pipeline, help to procure heavy road building equipment, construction of embankments and canals in Sarada, and two state-of-art IT institutions and a management school. Nepal is also seeking Indian investments in Special Economic Zones, constructing hospitals in the Terai and in Kathmandu, and help to revive the country’s dairy sector.

Importantly, a deal is expected to be signed on extending a $250 million line of credit, a form of loan assistance that is part of India’s policy to lend up to a total of US $ 500 million at a low annual interest rate of 1.75 per cent to the least developed SAARC countries. Some of this money will find its way to hydropower projects. Bhattarai is expected to request for a US $ 1 billion soft loan from India, along the lines of India’s loan to Bangladesh announced during the visit of prime minister Sheikh Hasina to New Delhi in January 2010.

How much of this is achieved will depend also on how successfully Bhattarai can convince the skeptics, and there are many at home.

As a transitional prime minister, no treaties and agreements should be singed that may have adverse long-term consequences, as they require parliamentary ratification and consensus support of the opposition parties, says Gopal Siwakoti 'Chintan' of the Water and Energy Users' Federation-Nepal. “The best he can do is to have a formal understanding for the review of controversial past treaties mainly for being unequal in sharing of resources and their benefits.”

On the eve of his departure for New Delhi, Bhattarai was advised by his restive coalition partners, Maoist party colleagues and leaders of other political parties to go slow on pushing ‘controversial’ bilateral issues, such as revising the 1950 Indo-Nepal Friendship Treaty, the deployment of Indian air marshals in Kathmandu airport, or an extradition treaty, until there was a solid domestic consensus at home.