Demand clean up of toxins in soil and water around Union Carbide plant, production of absconding corporation officials before Indian court 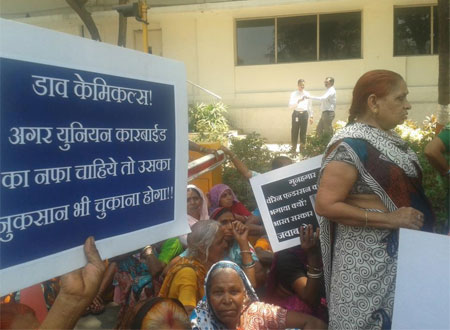 Godrej Business District Pirojshahnagar in the eastern Mumbai suburb of Vikhroli had some unusual visitors on Tuesday. They were not well-heeled business professionals but hundreds of poor women, children and men, shouting slogans and carrying placards and posters which denounced Dow Chemical International Private Limited for its apathy towards the victims and survivors of the Bhopal Gas Tragedy.

Nearly 200 protesters from Bhopal who had survived the Bhopal gas disaster, including many children born after the accident who are experiencing severe health complications due to toxic contamination in the erstwhile plant’s vicinity, demonstrated outside the office of Dow Chemical, demanding that its parent company in USA clean up toxic contamination from soil and ground water in and around Union Carbide’s abandoned factory. The protesters also demanded from Dow Chemical that owns Union Carbide produce the absconding corporation charged with culpable homicide before the Bhopal court.

Having received advance intimation about the arrival of protesters, the company officials had made additional security arrangements and called in the police. “Officials from our senior management had asked us to reinforce our security with additional personnel, add more personnel to the Godrej’s private security that looks after security in the premises and called in the police also. This helped in preventing the protesters from entering the building. Only a small delegation of five protesters was allowed in to meet the officials at the company’s reception briefly and by 2-2:30 pm they had left,” said a member of Dow’s private security.

Satinath Sarangi of the Bhopal Group for Information and Action was one of the five members who went in for the meeting. “We gave them our memorandum of demands and they responded saying that the senior management of the company will be informed about it but gave no time frame in which the demands will be addressed or responded to,” said Sarangi.

Nawab Khan of the Bhopal Gas Peedit Mahila Purush Sangharsh Morcha said that following its takeover of Union Carbide in 2001, Dow Chemical is responsible for the horrific birth defects and other health damages caused due to ground water contamination.

Balkrishna Namdeo of Bhopal Gas Peedit Nirashrit Pensionbhogi Sangharsh Morcha pointed out that Dow Chemicals is yet to pay additional compensation for deaths and health damage caused by the Dow subsidiary in the December 1984 gas disaster. “In 1989, Union Carbide had paid compensation only for 3,828 deaths whereas the total number of deaths has crossed 25, 000. Likewise, compensation has been paid for injuries to 102,000 persons while the actual number of persons injured by the disaster according to the state and Central governments is 568, 293.” (see Bhopal gas leak: curative petition downplays number of deaths; SC refuses to restore stiffer charges for Bhopal disaster accused and Union Carbide refuses more compensation to Bhopal gas leak victims).

For those affected by the accident, there may be some hope for justice. Rachna Dhingra of the Bhopal Group for Information and Action informed that in response to her organisation’s application, the Chief Judicial Magistrate of Bhopal will soon summon the Dow Chemical’s authorized representative from USA and ask it to show cause why it does not produce its full subsidiary Union Carbide that is absconding from charges of culpable homicide for the last 21 years.