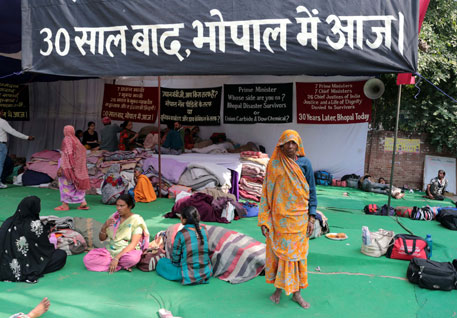 US multinational Dow Chemical Company failed to comply with the summons issued by the Chief Judicial Magistrate of Bhopal on a criminal complaint filed in connection with the 1984 gas leak in Bhopal that has claimed more than 20,000 lives till date. The company had been called to appear on November 12 to explain why it has not produced its wholly-owned subsidiary, Union Carbide Corporation, before the court.

The court has ordered another summons notice to be issued on November 22 and the hearing has been rescheduled for March 14, 2015.

For 13 years, Dow Chemical has denied that it has any responsibility towards the victims and survivors of Bhopal. In 2001, Dow acquired UCC, the US-based multinational that was the majority owner of the company that operated the plant at the time of the leak. UCC has repeatedly ignored orders to appear before the Indian courts to answer criminal charges concerning the disaster.
Non-profit Bhopal Group for Information and Action (BGIA) had filed an application in the court on February 26, 2004, seeking explanation from Dow Chemical on why it could not compel its 100 per cent subsidiary to appear before court.

The summons, the second issued to Dow, on August 4, this year made it clear that, as UCC’s sole owner, Dow has a responsibility to ensure UCC faces these charges.

Under a treaty between India and the US on criminal matters, the summons will be communicated by the Indian government to the US government for service on Dow at their US headquarters in Michigan. “Earlier summons, issued in February 2014, was sent to Dow through registered post and Dow had stated that this was not the correct procedure to send summons and that it should be routed through the US department of Justice. This gave Dow an opportunity to evade the case,” says Rachna Dhingra of BGIA.

Dhingra also complained that the Ministry of Home Affairs (MHA) has been very lax when it came to serving the summons through proper channel, giving Dow an opportunity to wriggle out of the legal case. She says that the progress report on initiating the summons submitted in the CJM court by CBI shows that Union home ministry forwarded the summons, which was sent to it by CBI in the last week of August, to the US justice department on October 22, this year. “What was MHA doing for such a long time? Why did they sit on the summons for so long before sending it to the US?” asks Dhingra. She says that BGIA has also filed an application in the court to carry on the proceedings ex-party. The application would be argued in the next hearing of the case.

The CBI counsel, Arpit Mishra, told the court that the summons was sent through proper channel to the American justice department but it has not responded yet. However, Mishra did not know whether the summons reached Dow through the US justice department. “When the US department of Justice did not reply, it was the duty of MHA to follow up. It is the age of phone and Internet. It seems MHA was not interested in finding out what happened to the summons,” she says.

Mishra also asked for the court permission for the CBI to get the news of Warren Anderson’s death verified from “appropriate authorities” in USA.

Meanwhile, victims of the 1984 Bhopal gas tragedy have launched an indefinite hunger strike at Jantar Mantar in New Delhi to pressure the government for additional compensation. Balkrishna Namdeo, activist fighting for the rights of Bhopal victims, says that people who were exposed to the gas still suffer from diseases caused by the poisonous gas. The diseases have been passed on to the third generation and there are so many children who are born with disabilities. “First, we want an additional compensation of Rs 1 Lakh for each victim. Second, data and figures of the number of deaths and those suffering should be rectified and they should be given compensation,” says Namdeo. This year would be the 30th year of the tragedy and the victims are still fighting for their rights, he adds.