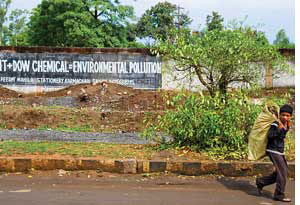 The Madhya Pradesh High Court has finally lifted a seven-year-old stay that prevented summoning of Dow Chemical in the ongoing criminal case in connection with the Bhopal gas tragedy. Dow Chemical is now the owner of Union Carbide, responsible for the gas tragedy in 1984.

The stay was granted by the high court in March 2005 after Dow Chemical International Private Limited (DCIPL) filed an appeal in response to a January 6, 2005 notice of chief judicial magistrate (CJM) of Bhopal, Anil Kumar Gupta. He had issued a showcause notice to Dow, stating, “It would not be proper to pass an order on fixing criminal and civil liability on Dow... without listening to the opposite party”.

The CJM order came after the Central Bureau of Investigation filed a chargesheet against Union Carbide in 1987. This is the only criminal case registered in India against the owners of the Bhopal pesticide factory.

In its order on October 19, the bench headed by Justice G S Solanki dismissed the petition stating that it is for the trial court to decide whether Union Carbide has ceased to exist following merger with Dow Chemical or if it still exists as a legal entity. The order states, “The question with respect to merger of Union Carbide Corporation (UCC) in the Dow Chemical Company, USA and whether UCC still survives as a separate legal entity are open for determination before the trial court.” The high court further observed the trial court had issued notice to Dow Chemical well within its jurisdiction.

Expressing relief over the progress in the case, Rachna Dhingra of Bhopal Group for Information and Action said it is a big step towards making Union Carbide face trial in India, which has been absconding for over two decades now. In February 2004, Bhopal Group for Information and Action had filed an appeal in the CJM court of Bhopal, asking that Dow Chemical USA be summoned to clarify why it cannot produce its own subsidiary UCC before the Bhopal court in the ongoing criminal case. The company was declared an absconder in 1992 and has officially denied any responsibility for the 1984 disaster. Dhingra also cautioned that the company may file an appeal against the order in the Supreme Court.