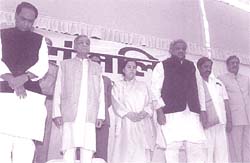 as preparations for yet another anniversary to mark the Bhopal gas tragedy got underway, a rude shock awaited the victims. The Madhya Pradesh government was reportedly planning to close the down the Gas Relief and Rehabilitation department. Sixteen years ago, a leak of the deadly methyl isocyanate from the Union Carbide claimed more than 2,000 lives. Even today, there are thousands of people suffering from the effects of the gas leak.

"The department is being closed because many officials are siphoning off the relief money," alleges Satinath Sarangi, of Sambhavna Trust, an organisation working for the victims. D S Mathur, principal secretary, public health and family welfare department, however, refutes the charge: "We do not have any plans as yet." Abdul Jabbar, convenor, Bhopal Gas Peedit Mahila Udyog, another organisation fighting for relief victims says that the government will use the remaining money as a corpus to provide the care to the victims.

This year's anniversary was different from previous years. For the first time, a prayer meeting was held inside the factory premises. The chief minister, Digvijay Singh and Union minister of state for sports, Uma Bharati, attended the meeting. Incidentally, the plant still stores a large amount of the toxic chemicals. Meanwhile, a new study by the Bhopal-based Centre for Rehabilitation Studies warns that the health effects could last for more than 50 years. It is alleged that thousands of tonnes of chemicals have been dumped in and outside the factory.