Big promises to curb hypertension, but no funds 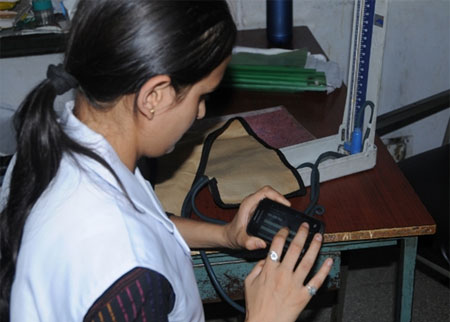 The theme of the World Health Day 2013 is high blood pressure, responsible for life threatening conditions like cardiovascular diseases and associated comorbidities such as strokes. “High blood pressure affects one in three adults worldwide and leads to more than nine million deaths globally every year. Many people do not even know they suffer from high blood pressure,” says Nata Menabde, WHO Representative to India.

In an effort to reduce non-communicable diseases like hypertension in the country, the Union Ministry of Health and Family Welfare launched the National Programme for Prevention and Control of Cancer, Diabetes, Cardiovascular Diseases and Stroke (NPCDCS) in 2010. Under this, so far 17.6 million people, aged 30 years and above, have been screened for diabetes and hypertension. The results show 7.22 per cent were suspected of having diabetes and 6.59 per cent with hypertension. These figures are likely to be an underestimation. As a study by the Centre for Chronic Disease Control (CCDC), a New Delhi-based not-profit research organisation, found more than 50 per cent of the people tested were suffering from high blood pressure (see 'Himachal model shows the way').

At present, NPCDCS covers 100 districts, up from 10 districts last year. Secretary with Union health ministry, Keshav Desiraju, says the government is planning to expand the programme to all districts in the country during the 12th Five Year Plan. Analysts, however, doubt the success of the scheme in absence of sufficient funds and a detailed plan for expansion of the scheme.

Desiraju says the Planning Commission has earmarked Rs 1,000 crore for NPCDCS in the 12th Five Year Plan. But the programme may not receive the promised funds given that in the first two years of the Plan period, the entire health sector has received just Rs 67,000 crore of the Rs 3 lakh crore estimated for the Plan period. A ministry official says there is intention to expand NPCDCS, but no details have been worked out so far. He informs that funds for the expansion are yet to be allotted.

Disease affects the overall economy of a country. “If productive population suffers from the disease, they cannot perform as good in the profession as they would as healthy citizens. Then, there is cost of hospitalisation and medicines. All this constitutes the economic loss that a nation suffers from a disease,” says Renu Garg, regional advisor for non-communicable disease, WHO Regional Office for South-East Asia.

Pointing to the need to curb high blood pressure as an immediate measure, Srinath Reddy, president of Delhi-based non-profit Public Health Foundation of India, says, “The proportion of deaths caused by cardio-vascular diseases is increasing in the country. If we go by the trends, then the proportion will increase to 36 per cent from the current 29 per cent.” He said that in the population above 60 years, high blood pressure is the topmost chronic disease. He said the economic burden due to hypertension in India is Rs 43 billion.