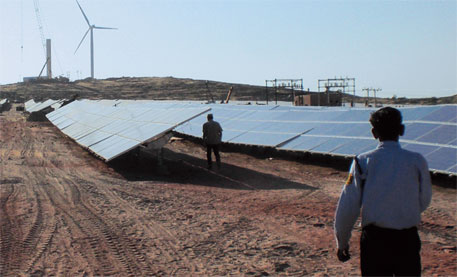 Highlighting new and renewable energy as the high priority sector, Finance Minister Arun Jaitley focused more on the big solar power projects in his budget speech, neglecting decentralized mini and micro grid solar projects for rural areas of the country. However, solar power agricultural pumps have been given a big boost in the budget.
The BJP-led NDA government has taken up the Ultra Mega Solar Power Projects (UMSPPs) announced by the previous UPA government in Rajasthan, Gujarat,and Ladakh in Jammu and Kashmir. Jaitley has allocated Rs 500 crore for these projects. The projects received flak from some renewable energy experts advocating the need of mini-grids over big solar projects. Jaitley has added Tamil Nadu in the list of states where UMPPs will be set up.

Solar power project developers have expressed happiness over the announcement. “The government must be congratulated for laying a roadmap for solar power generation in the country. The ultra mega solar power projects are going to help in a big way in ensuring clean energy. The only constraint with big projects is geographical, which may affect its sustainability,” said Disha Banerjee, secretary general, Solar Power Developers Association.

However, some renewable energy experts believe that these ultra mega solar projects would feed electricity into the leaking grid and provide subsidized power to the rich, while the focus should have been on the mini and micro grids in the rural areas. As per the Census 2011, one-third of households—about 400 million people—do not have access to electricity. “Solar energy is decentralised—sunlight falls everywhere. Demand for electricity too is decentralised. This makes solar PV technology, which is modular, most suitable for decentralised generation and consumption,” says Chandra Bhushan, deputy director of Delhi based non-profit, Centre for Science and Environment.

“The focus of the government is on providing 24X7 electricity to all, which is difficult to achieve without mini-solar grids in rural areas. We need to understand how the government plans to do that,” added Banerjee.

Targeting an important sector of agricultural pump sets, Jaitley announced that a scheme will be launched for solar power driven agricultural pump sets and water pumping stations for energizing 100,000 pumps. The budget has allocated Rs 400 crore for this purpose. The move has been welcomed by all quarters. An additional Rs 100 crore has been allocated for the development of 1 MW solar parks on the banks of canals.