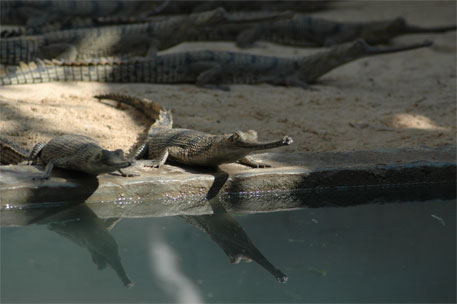 Gharial, a reptile that according to International Union for Conservation of Nature (IUCN) is a critically-endangered species, is on the course of revival in Bihar.

The state forest department, along with Wildlife Trust of India (WTI) and Sanjay Gandhi Zoological Park, has recently released a fresh batch of 24 gharials into the River Gandak, near Valmiki Tiger Reserve. All the radio-collared and tagged reptiles will be kept under observation for next one year.

B A Khan, principal conservator of forests told Down To Earth that the state has been breeding gharials in captivity at Sanjay Gandhi Zoological Park for past few years. “The breeding has yielded good results and now we are rehabilitating these animals in their natural habitat,” he said.

Last year, six gharials were released in Gandak and they adapted to their natural habitat easily. However, a fresh batch of 24 gharials that was released a few weeks back is reportedly creating a problem for the forest department. Recently a group of four gharials took abode near a village in the tiger reserve, forcing its residents to flee their houses. The residents returned only after the forest officials had moved the group back to the river.

Khan pointed out that deviation of gharial from their natural habitat to a village is a one-off incident. “Gharials are adjusting very well in Gandak.  Both WTI and the state forest department are keeping a close eye on the movement of the reptiles,” he added.

The fish-eating gharials belong to the crocodilian family. According to IUCN, population of these reptiles has declined by up to 94 per cent due to rampant hunting and killing for their skin. The Central government had even initiated Project Ghariyal in 1975 to boost their population and had put it under Schedule 1 category.

Officials of state forest department maintained that a team of dedicated staff, along with Samir Sinha (an expert from WTI) are not only monitoring rehabilitation but also looking into boosting breeding of ghariyals in the natural habitat of Gandak. “It will take another one year for Gharials to adjust in their natural habitat and start breeding. We are devising a way to monitor the nest and eggs laid by the reptiles,” Khan added.

Gharials are found in India, Nepal, Pakistan, Bangladesh and Burma.