Bihar has an ambitious plan to link its rivers and tame the Kosi river, often referred to as the 'Sorrow of Bihar'. The preliminary proposal report (PPR) sent by the state has been accepted by National Water Development Authority. To begin with, the state is planning to invest Rs 4,441.82 crore on Kosi-Mechi link and works related to it.

The National Water Development Authority has forwarded the proposal to the Central Water Commission. Officials of state water resources department say they expect to receive the final sanction for linking rivers in the next couple of months. “The detailed proposal has been prepared after keeping in view all the environmental concerns,” says Dhirendra Kumar, engineer-in-chief (central).

In the first phase, Bihar will connect eight rivers,  the Kosi-Mechi link will be the first project. The Kosi will be connected with the Mahananda through a 120 km-long canal. This link is considered crucial to control floods in the state. Kosi, in the past few decades, has inundated scores of villages in the region. This link will make Bihar’s worst flood prone districts safe, claim officials. Kishanganj, Supaul, Purnia and Araria that were worst hit in the 2008 floods will become safe districts, it is claimed.

The devastation cause by the Kosi in 2008 displaced around three million people  and an estimated amount of nearly 1,000 crore was spent on relief and rehabilitation of flood victims. Chief Minister Nitish Kumar had sought financial assistance of Rs 14,500 crore from the Central government to rebuild Kosi region after the floods. 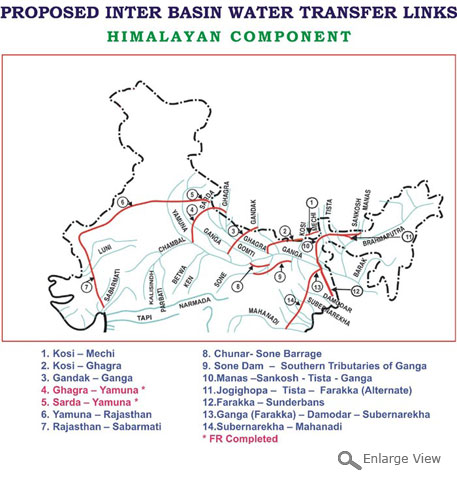 The state is preparing a detailed project report (DPR) for the Kosi-Mechi link. Every year hundreds of families are forced to migrate during monsoon in these districts. The weak embankments along the Kosi forces the state government to cough up crores of rupees for its maintenance and repair. “The pressure on embankments will reduce to a great extent,” engineer-in-chief Kumar adds.

The state is also planning to reactivate its defunct hydro-power production through river linking and also enhance agriculture production in the state. The Kosi-Mechi link is likely to provide water to around over 100,000 hectares of farmland. However, officials refuse to speak anything about the farmland that would be lost because of river linking. “We can get the exact figure of land that needs to be acquired in December,” officials say.

Four out of a total eight projects for river linking is for controlling and mitigating floods in the state. The state has also identified a few private construction companies having requisite expertise for construction of canals. The flood mitigation schemes include: the Kosi-Bagmati-Ganga link, Burhi Gandak-Ganga link, Bagmati-Burhi Gandaklink and Kohra-Chandrawat link.

Altogether, the state has prepared around 15 schemes for connecting its rivers. The preliminary reports for all the schemes have been prepared and submitted to the various departments of the Union government for approval. Eight out of fifteen schemes are for controlling floods. Bihar is planning to make itself flood free by 2025.

The river linking plans of the state slowed down in the last few months because of massive reshuffling and retirement of senior officials.

Activits are, however, critical of the ambitious plan. Dinesh Mishra, a civil engineer who has researched Bihar floods for  many years, says that river linking plans have little to do with flood control. Major floods happen because of lack of maintenance. Even in the 2008 floods, the embankment cracked because of attitude of engineers and lack of political dialogue with Nepal. “State might be preparing another grand plan for flood control but it’s building another infrastructure for disaster,” Mishra says.

Experts also say that there is little study on flooding of the Kosi and Mechi rivers. In case the Kosi and the Mechi are in spate, then both the rivers will overflow, resulting in flood. River linking will help only if the Kosi has excess water and the Mechi has less water or vice-versa. Even in that case, river linking will fail to meet the desired objective. “In these scenarios flood control or benefit to agriculture plans will fall flat,” Mishra adds.

A debate is also raging over the outsourcing of construction work to private players for river linking. A section of activists are demanding that accountability of malfunctioning or weak infrastructure should be fixed.
Web Specials Web Specials Web Specials River interlinking Nitish Kumar National Water … Mahananda Kosi Floods Floods engineer-in-chief (… Down to earth Dinesh Mishra Dhirendra Kumar Bihar
SUPPORT US