Kitchens with storage facilities to be constructed on priority basis in all schools serving cooked meals, says education department

In a bid to control cases of food poisoning caused by mid-day meal, the Bihar government has decided to close down all schools without buildings.

The state education department says majority of mishaps relating to mid-day meals is happening because of poor infrastructure and apathy of school management committees.

R Lakshmanan, director of mid-day meal scheme, said that government is aware that in some of the villages primary classes are held under trees. “In that case, mid-day meal is prepared under the sky, which leads to reptiles creeping into the containers in which food is stored,” he said.

According to unofficial figures, there are over 220 schools in the state that hold classes under trees. Some of them were shifted into community hall or panchayat bhawans. 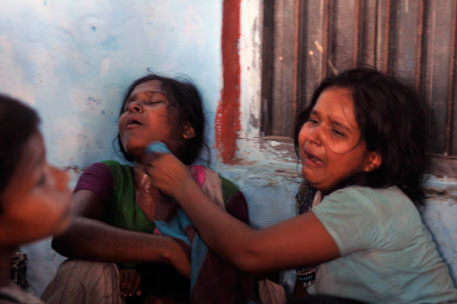 The state education department has also decided to construct kitchens on  priority basis in all the schools that serve mid-day meals. There are around 7,300 schools in the state that have no kitchens or storage facility. It will also prepare a hygiene code for kitchens and staff.

Storage containers along with kitchen appliances would be sent to each school, said officials. Poor handling of food grains and vegetables is suspected to have caused the deaths of the 23 children in Chapra. The education department will also enhance the training of cooks and headmasters in schools, officials said.
An order has been also issued that mid-day meals will be now first be tasted by the headmaster and cook of the school before it is served to the children.

Confusion and panic gripped the paediatric ward of Patna Medical College and Hospital on Friday when an under-repair air conditioner caught fire. The entire emergency ward was evacuated as the fumes started sperading.
Children of Dharmasati Primary School, who had fallen ill after eating poisonous mid-day meal in the school, are also being treated in the ward.

Parents of children began to panic when the hospital staff started removing oxygen cylinders. Police had to intervene to bring thing under control.