Use loopholes in implementation of government housing scheme; police at a loss 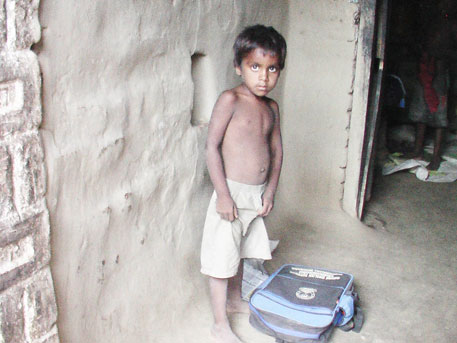 Four years and two months old Sachin Ram, who falls in below poverty line (BPL) category and lives in Shahpur village of Bihar’s Begusarai district, has a 26-year-old wife. So does eight-year-old Roshan Ram. Dillip Ram (6) and Jitendra Ram (12) are also married to women who are at least 20 years old. Shiela Devi, Leela Devi, Reena Devi and Babita Devi have submitted written declarations to the district administration that they have married these children. The declaration makes them eligible for homes from the government.

While reviewing housing allotments under Indira Awaas Yojana (IAY) for poor families, the district administration stumbled upon the four declarations of marriages that never took place. The housing scheme entitles only married women who belong to BPL category to avail the facility.

The investigation team formed to verify facts found that all four women had received Rs 70,000 and had constructed two-bedroom houses for themselves in the village. Preliminary investigations reveal the women are absconders and are wanted in forgery cases. They have declared that their husbands are migrant workers employed in Punjab, says Afzaloor Rahman, director of national rural employment programme, Begusarai. “We cross verified their claim through BPL cards and found that their husbands were, in fact, children between six and 12 years,” he adds.

“Usually, a girl has her name in the BPL card of her father or mother. There are very few BPL cards that have names of both the husband and the wife,” says Rahman. To avail benefits of the IAY housing scheme, a beneficiary must produce her BPL card as well as her husband’s. Complications arise in cases where the husband is a migrant worker and, therefore, does not have a card. “In such cases, we take a declaration from the applicant along with her husband’s photograph,” says Rahman. All four women had submitted photographs of men who look above 20 years of age, he adds.

Meanwhile, the four children, all belonging to scheduled caste category, are a scared lot. Roshan and Dillip hide every time they see a policeman. “Village youth mock us and say police will come and take us away,” they say. “I have not married Sheila aunty. I swear to God,” says Sachin to the five-member investigation team headed by Rahman.

The district administration is now looking at possibilities of allotting the four houses to genuine beneficiaries. It is also trying to plug the loophole that led to the incorrect allotment. “It happened because of the absence of a clear directive on the identification process of married women and their husbands,” says Kumar.

Police, on the other hand, claim they cannot do much in the case. “There is no clear directive under which Act we can initiate action,” says Lalit Mohan, deputy superintendent of police, Begusarai said. The district police can neither take action for fake marriages, nor arrest the children, he says. It has also neither filed forgery cases against the women nor procured arrest warrants for them.

Manoj Kumar, collector of Begusarai, fears that the four cases may not be isolated. There may be many more such cases in the district, or even the entire state, he says. “We are now verifying all the allotments under IAY,” he says. Meanwhile, Sachin has tears in his eyes as he tells the probe team, “I will never ever marry in my entire life.”