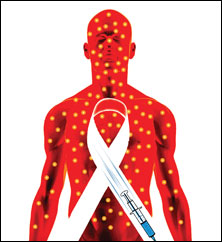 OPERATION Smallpox Zero was launched in India in 1975. Around this time, a WHO official has been quoted saying he would “eat a tyre off a jeep” if smallpox was eradicated in India. D A Henderson, the programme’s director, is said to have sent him a jeep tyre. Smallpox was certified globally eradicated on December 9, 1979.

But relief over the first success story of modern medicine was short-lived. The experts of the immunization drive did not know that another virus, lurking in the African forests, was as keen for smallpox to clear out as they were. Soon, the mysterious virus ended its long wait for rapid infection. It came to light in the 1980s as HIV and is still counting its victims.

“Assuming the AIDS virus first emerged in a small area in West Africa in 1930s, give or take 15 years, how did a sexually-transmitted disease spread so rapidly and widely as opposed to airborne ones?,” asked Raymond Weinstein from the biodefence programme at George Mason University in USA. What had changed post the 1970s? The period that marked the eradication of smallpox and merged into the rapid spread of AIDS had caught Weinstein’s eye. Sure, there were socioeconomic factors like unprotected sex and drugs but Weinstein’s team could not ignore a protein called CCR, essential to both the viruses.

“CCR5 and CXCR4 are two receptors on cell surfaces that help immune cells go to infection sites. HIV uses them to invade cells as a part of its life-cycle,” said Michael Weinstein, geneticist from the University of California at Los Angeles and a member of the study.

“Some European people have a mutated CCR5 gene which makes them HIV-resistant,” said Michael Bukrinsky, vicechair of microbiology, immunology, tropical medicine at George Washington University in USA and a study partner. Earlier research has shown that the pox virus uses the same route for infection. So if one’s immune cells were kept busy by pox, he or she might be resistant to HIV.

Twenty healthy naval personnel with ages between 19 and 41 years were chosen to prove the theory. All had had their doses of essential immunizations and had tested HIV-negative. Of the 20, 10 were given a smallpox vaccination.

White blood cell samples were taken from the people and their cultures were infected with HIV. Its replication in cells that received the smallpox vaccine decreased considerably. When more serum was added, it boosted HIV replication only in the non-vaccinated culture, said the study published in BMC Immunology on May 18.

How does the study explain HIVpositive people who also received the smallpox vaccine? “Adapted immune response induced by vaccination eventually decreases. In our case, it is the innate immunity induced by the vaccine that conferred protection but it is shortlived usually. So it was exciting to see protection even a year later,” said Bukrinsky. Geetha Bansal, at the National Institute of Allergy and Infectious Diseases in USA, agreed: “The implication is noteworthy for use of different vectors to deliver HIV immunity.”

Virologist T Jacob John, however, thinks the link made by the study is a mere speculation. The doctor from the the Christian Medical College in Vellore, said: “Imagine the smallpox vaccine continuing into the 1980s and thereafter. Its side-effects were lifethreatening in some cases. I think we were plain lucky that HIV became prevalent only after smallpox was eradicated.” Henderson concurred: “I think it is an interesting observation without enough substance to warrant any application.”