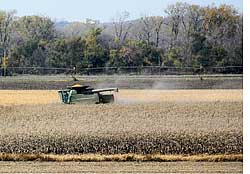 biofuels have often been billed as the silver bullets of climate change. In recent times, however, their benefits have come under scrutiny. One analysis suggests that clearing forests and savannah to grow biofuels releases vast amount of carbon into the atmosphere, far more than the carbon spared from the atmosphere by substituting fossil fuels with biofuels.

Plant-based fuels were originally touted as better than fossil fuels because the carbon released from their burning was said to be balanced by the carbon absorbed when the plants grew. But the recent study has claimed this equation misses out on the destruction of natural carbon sponges to grow plants for biofuels. It was published in the journal Science (Vol 319, February 29, 2008).

The researchers calculated ghg emissions as a result of the 56 billion litres of biofuel projected to be used in the us by 2016. This will require bringing 10.8 million hectares of additional land under biofuel crops. "If this land comes out of forest or grassland, there is a quick release of carbon as a result of removing vegetation and tilling the soil," says T Searchinger, professor at Princeton University's Woodrow Wilson School, the paper's lead author.

The researchers found that in 2015 ghg emissions could indeed reduce by 20 per cent from current levels if global biofuel use projections are met--but only when emissions due to land use change were not factored in. Once such change was accounted for, ghg emissions from corn-based fuels rose by 93 per cent and emissions by biomass-based ethanol increased to 50 per cent compared to current fossil fuel use.

At the University of Leicester researchers punctured the claim of the biofuel lobby that palm oil helps fight global warming, especially when plantations are raised in tropical peats--swamps or moors. They showed that producing a tonne of palm oil on peats generates 15 to 70 tonnes of co2 over 25 years due to decomposition of vegetation and emission from fires associated with land clearance.

Biofuel crops received further bad press when a study published in the Proceedings of the National Academy of Sciences (published online on March 10, 2008) showed that meeting the us' 2016 ethanol demand from corn could worsen the Gulf of Mexico's dead zone--an area with very low oxygen. The study used a computer model to show that nitrogen pollution in the Mississippi and Atchafalaya rivers, which flow into the Gulf of Mexico, could increase by 10-35 per cent from the refuse of fertilizers used to grow corn.