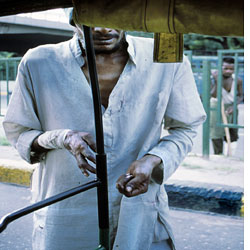 At the end of a daylong futile search for job, Mohammad Javed made his way to a temple in Old Delhi's Meena Bazaar in the hope of getting some prasad. Little did he suspect a 'raiding squad' swooping down on him and bundling him off to Sewa Kuteer, a beggars' home at Kingsway Camp. "I do not beg. I came here to work. But when there is no work we go to the temple to take the prasad. And if somebody gives a little money I don't mind taking it, but I don't ask for it," pleads the 26-year-old, who ran away from home in Sultanganj, Patna, six years ago. Javed will probably escape punishment for 'begging' this time but his data has been entered into a biometric identification system, which means he has been tagged a beggar by the government for the rest of his life.

At Kingsway Camp an experiment is under way. Delhi's Department of Social Welfare (dsw) has installed a biometric machine at its classification centre there. It records the picture, fingerprint and the height of the person brought there by the department's raiding squads, besides his/her address, begging history and health record. The system is part of a grand plan to rid the city of beggars by the 2010 Commonwealth Games. "We have increased the pace of raids. In 2005, we caught 1,000, while the number went up by 475 in 2006. In 2007, we apprehended 2,533; target is 5,000," says a dsw official.

"This way we will be able to maintain a file on each beggar and monitor his/her rehabilitation in the long run," says Ranjan Mukherji, secretary to the Lieutenant Governor of Delhi. But will it work? dsw, the Delhi police and the Lieutenant Governor affirmed their faith in it when they cleared the scheme last month, but social activists see it as criminalization of poverty.

"By recording their fingerprints, cornea and photographs, they are treating beggars like criminals. Are they trying to prove that poverty is a crime?" asks Indu Prakash Singh, national theme leader (shelters and housing), ActionAid India. Javed says he wants to work, so that he can send money home. "I haven't been able to do that. But that isn't as bad as staying inside a jail like this," he says. Sewa Kuteer has hundreds of other inmates, young and old, picked up from temples and gurdwaras across the city. There is 60-year-old Devi Prasad who came from Kanpur in search of his son Deepak. "I am not a beggar. It does not matter even if they take my photograph. The sad part is I will not be able to come here often to see my son, who is my only family," he says.

A source in dsw said they caught beggars only from temples and gurdwaras and avoided traffic junctions. "Chances are we will have to run after a beggar. That can lead to accidents," he said. The department also avoids drug addicts. "They have suicidal tendencies. Once a beggar swallowed a blade. If they do not get anything else, they eat up soaps. If something goes wrong, the National Human Rights Commission will get after us," he said. This means hardened beggars remain out of the reach of the biometric system and only those who come to the capital to work can be monitored. "No work or bad working conditions leave many with no option but to beg. And then the authorities arrest them," says Singh. "Even vending is an offence."

As per the Bombay Prevention of Begging Act, 1959, the definition of beggars includes anybody who receives alms at public places, even by way of selling small articles, or has no visible means of subsistence. A 2000 study by the Centre for Media Studies on beggars says the rehabilitation measures required under the act have not been taken. One would hardly find any beggar after his release from a beggars' home taking up an income-generating activity by undergoing vocational training provided by dsw, says the study. Delhi has 11 beggars' homes.

Even dsw officials are not sure whether the biometric system will help control begging. "What will happen with this machine? Beggars will keep coming here and we will keep recording their data," says the dsw official. At Kingsway Camp, though, the test run on the biometric software is on. Outside, a raiding squad has spotted another unsuspecting boy accepting a few coins from a kind stranger.